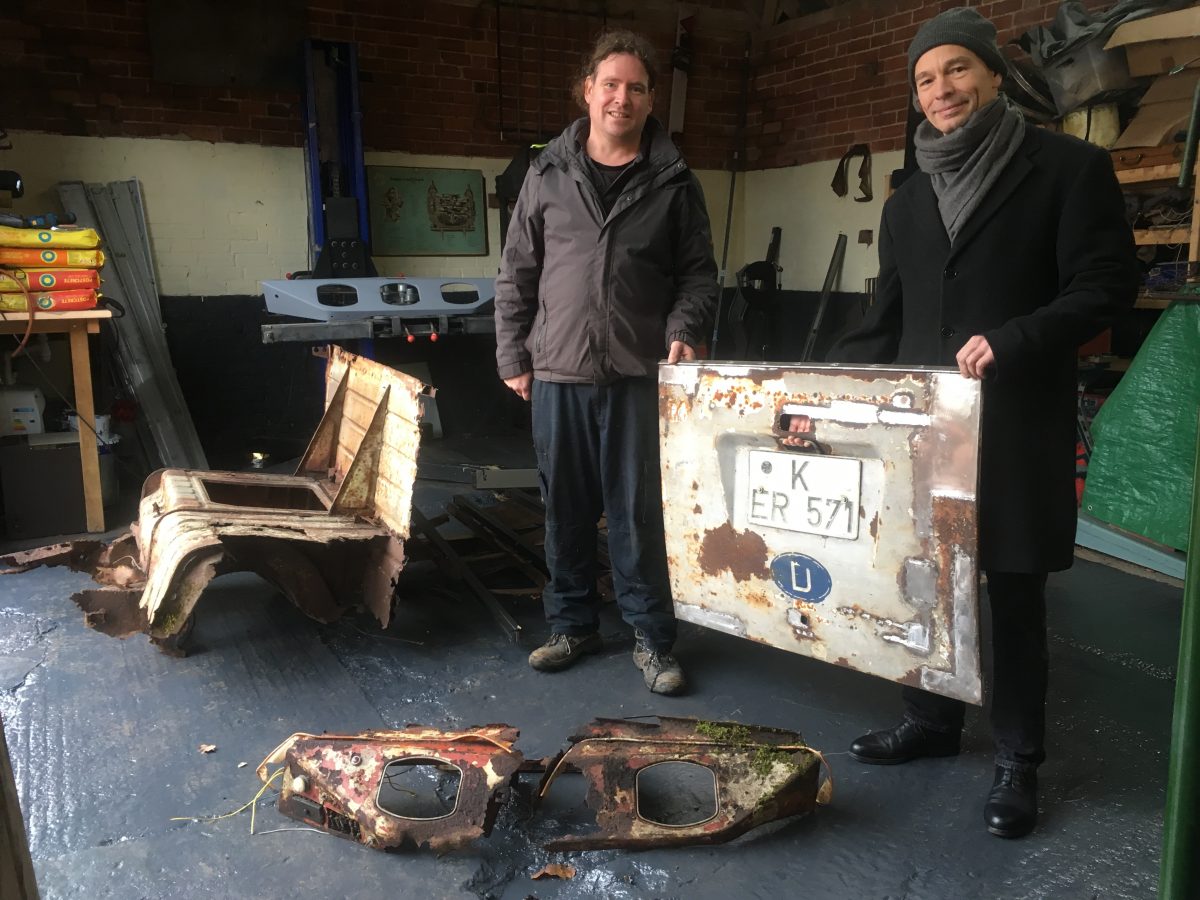 Two men, one mission: fresh up the dash as nice as the decklid. The poor two metal fragments in front of our feet are the point to start from

as you know Mark finished the Samba´s decklid perfectly. Barndoor decklids are one of Mark´s specialties, but he is also an expert for Samba dashes. Sure he agreed to reconstruct the whole body of the Samba, but it´s always nice to see some quick progress in such a big project, so we decided that the reconstruction of the dashboard is next on Mark´s agenda.

On the picture above you see where we start from: two poor metal fragments, but there are still the two fuse boxes, one of them even with the cover, there is the white beading between the dash and the front end, there is also the middle block-off plate and its chrome rim. 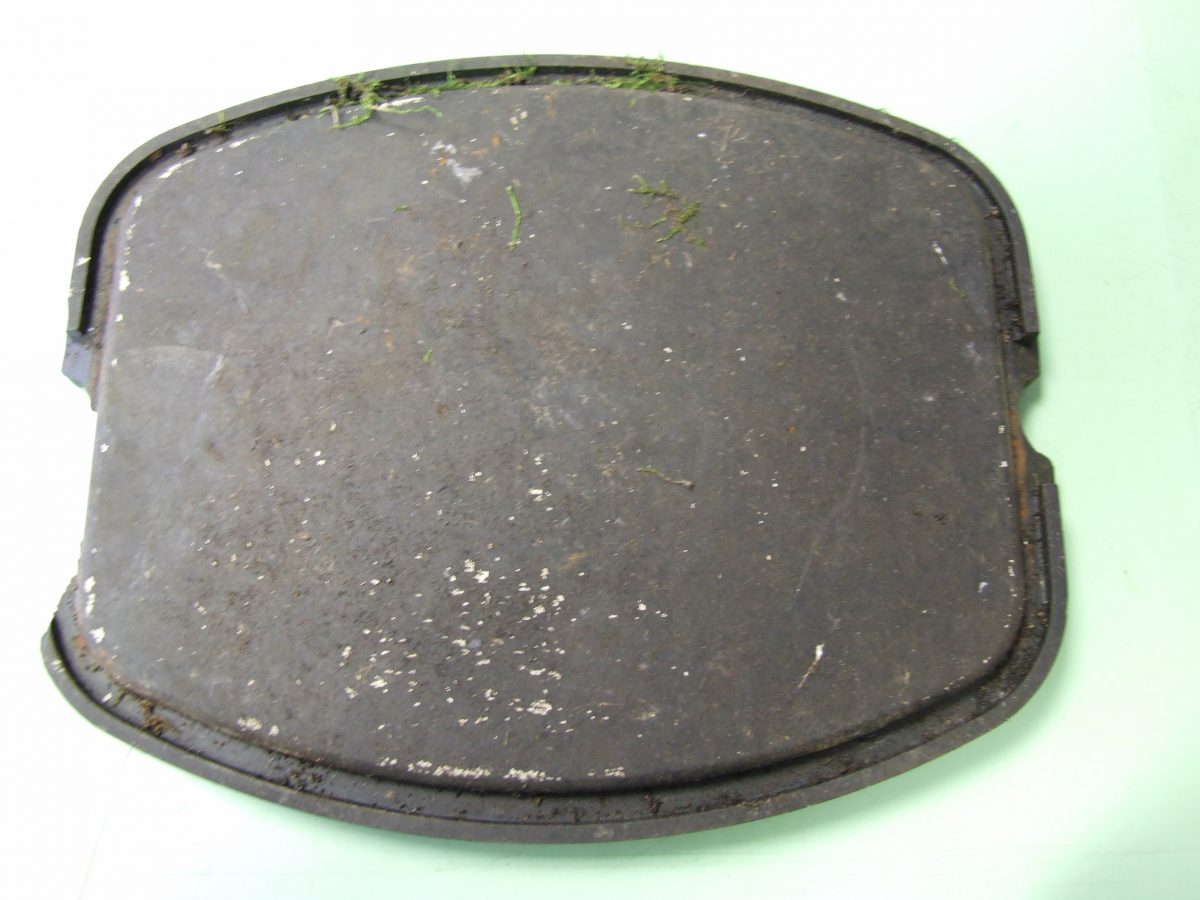 The Samba´s block-off plate. It  stuck  in the mud where the Samba was found. 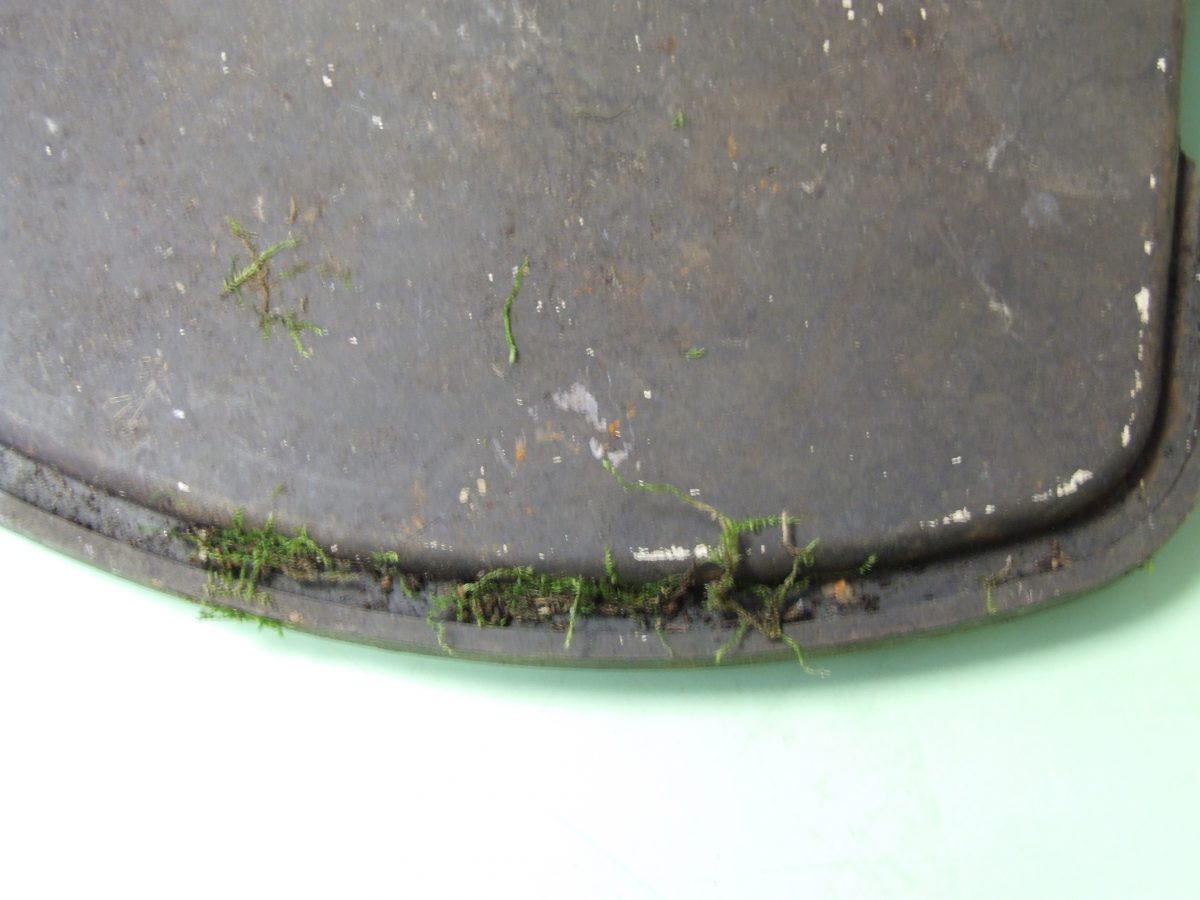 When you look real close you see some very little remains of the white color. We will fit in the plate in the dash just in this certain condition. Even the moss will stay. No kidding!

Also the chrome rim was still with the Samba. Rusty, but not even dented! Sure also this we will fit into the dash just in this condition. “But there brand new Chinese reproductions of the rim….”    “No way!”

While Mark is working on the dash itself, it´s my turn to get all the missing parts. As you know from an earlier post I found the very correct speedo on E-Bay luckily. So it was easy to fit it into the nice dashboard plate I found in Rosmalen recently. Doesn´t it look pretty cool? 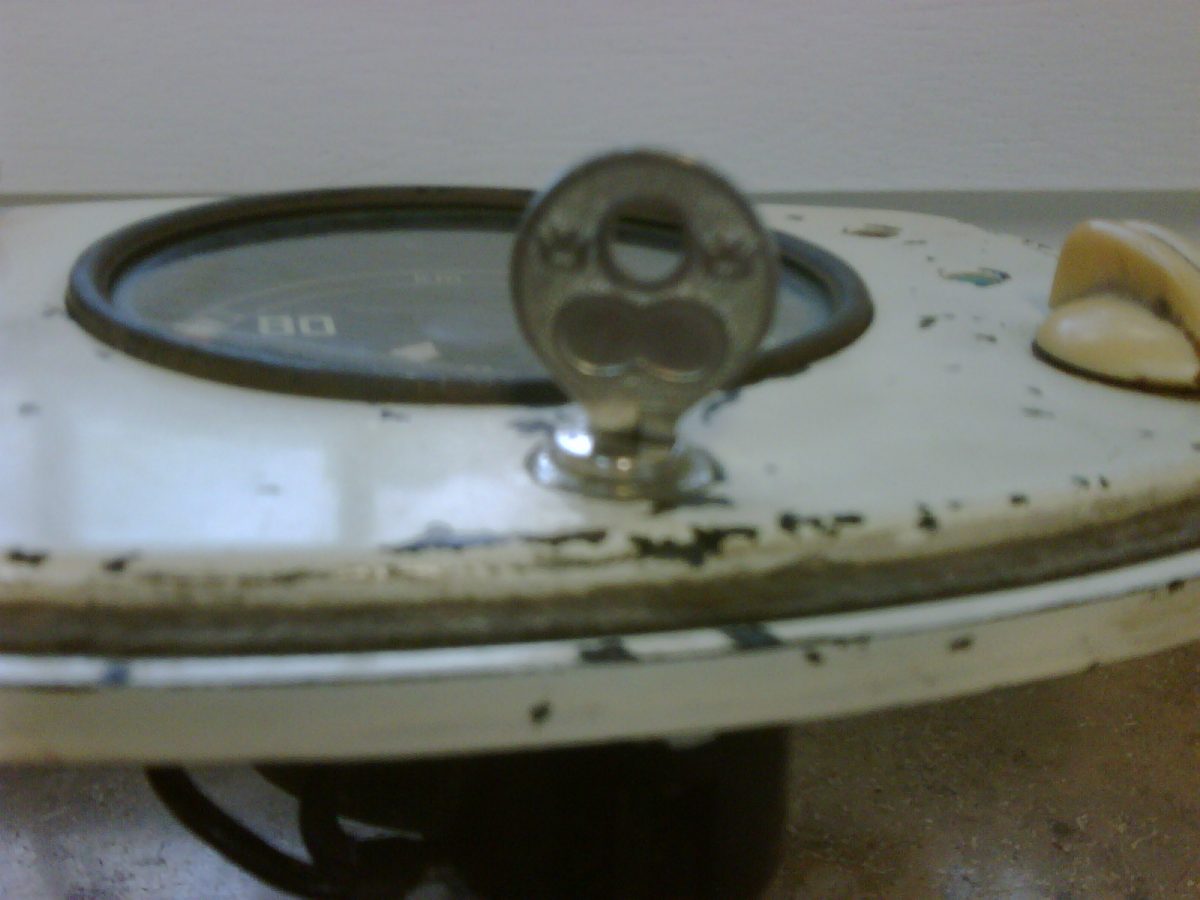 I now have also a matching key for the ignition lock. It didn´t came with the unit when I purchased it in Rosmalen. How I got the key is a very special story, it will fill a complete post somewhere in the next weeks. It is going to be a real freak show. Don´t miss this one!

The clock looks a bit to mint for this project, don´t you think so? Anyway! By now I am sure that this is definitely a real Samba specific clock. Everything what I could find out so far confirms this theory. Can anybody dispute?

I know there are long discussions about the correct ashtrays for the pre ´55 Samba. Luckily I do have a lot of ashtrays in stock. Due to the picture in the very first Samba sales brochure I am very sure that this Happich (GHE) unit is the correct one for 1951: 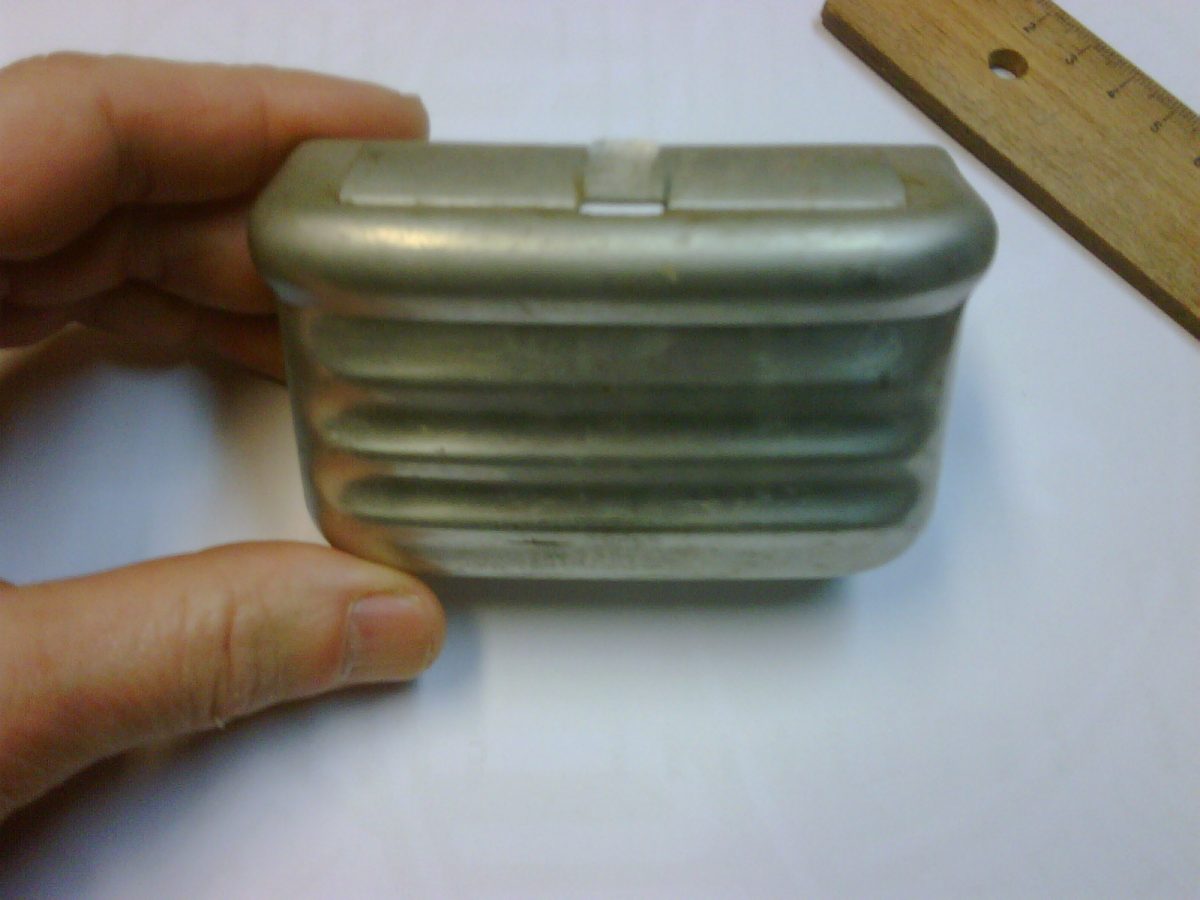 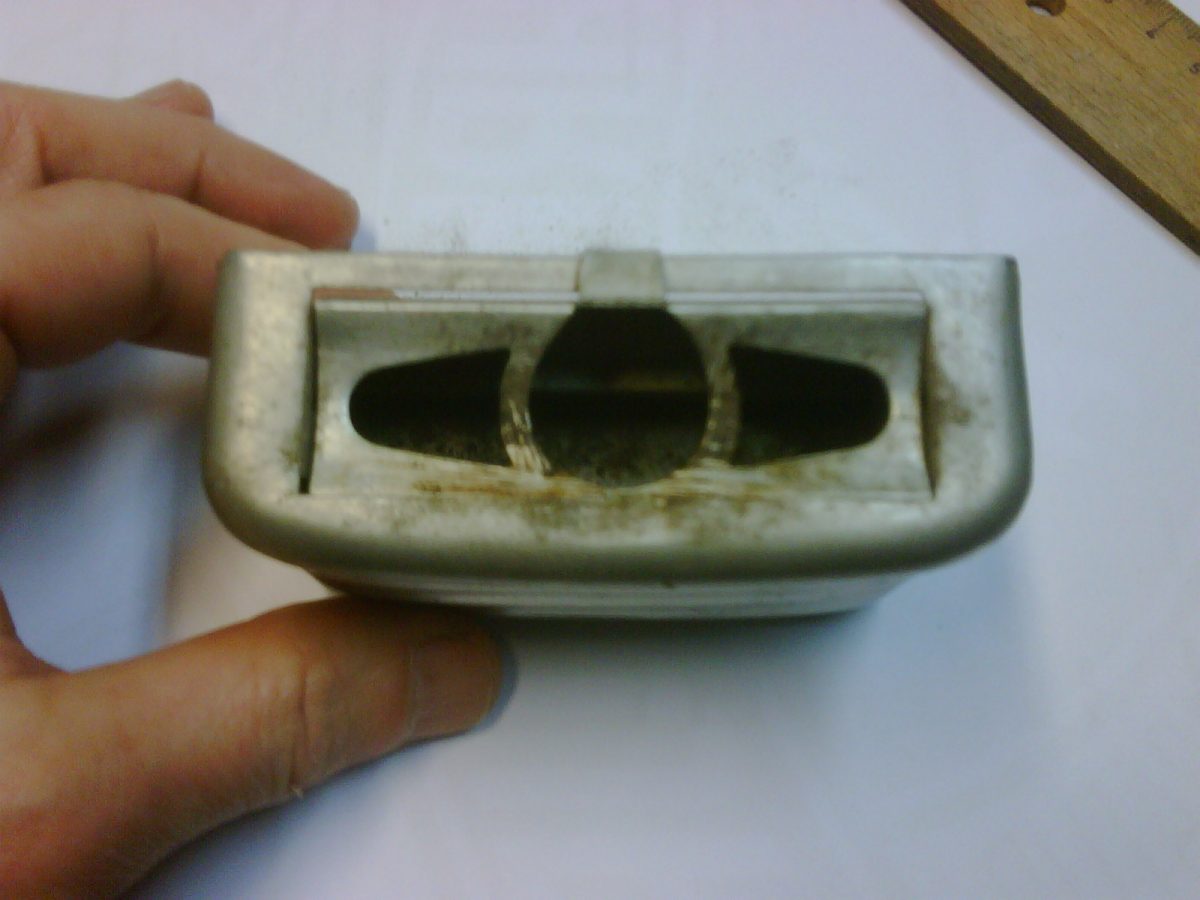 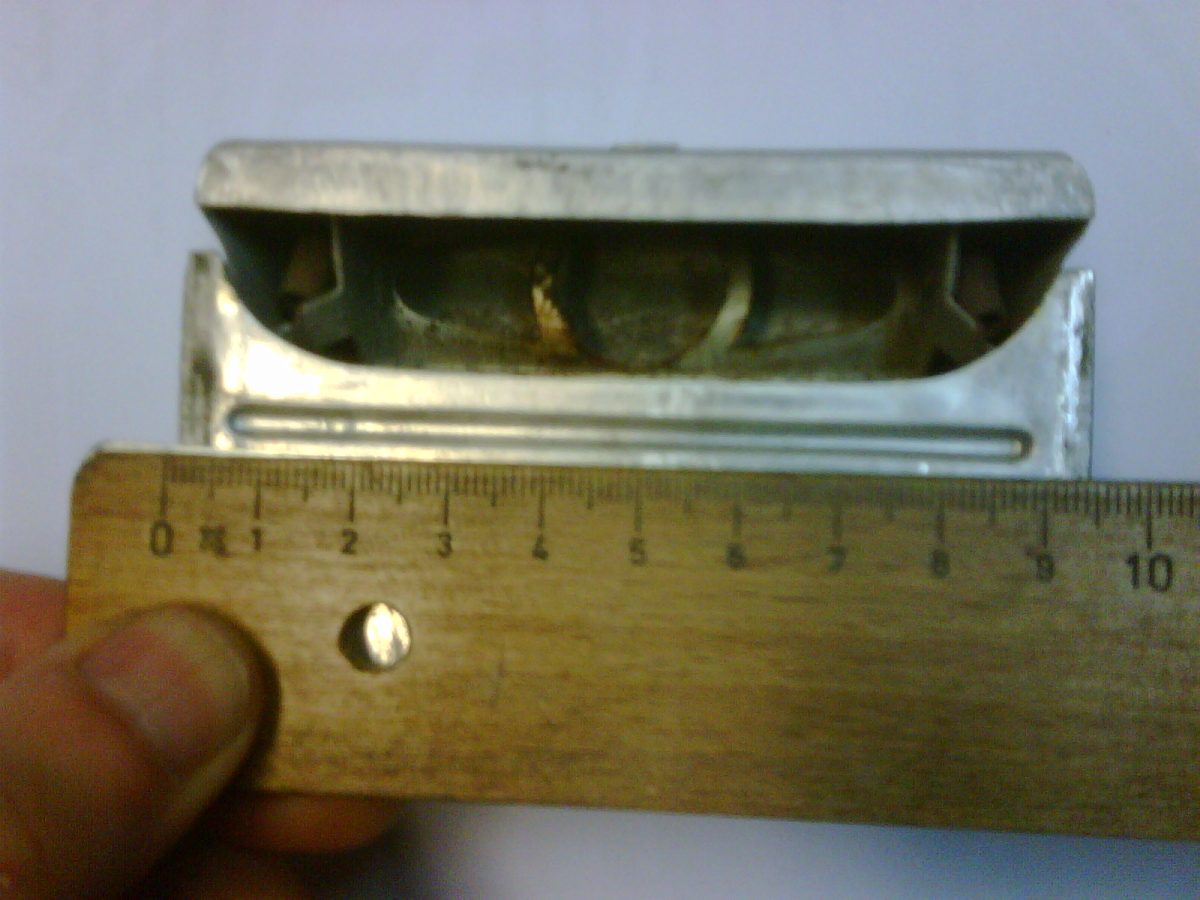 Come on experts, get me your comment. Is this the correct ashtray?

What I need now is the correct frame to slip in this ashtray. Can anybody help?

I know, I also need the little upper switch for the dash (what is it good for anyway?) and the correct starter button, but this is not a big deal to find, is it? Should be the same one as for split window bug, at least when the 1953 VW parts catalog doesn´t lie of which I am certain.

So, Mark, it´s your turn, I nearly finished my homework   🙂

Don´t get me wrong. There is still enough time until the big Barndoor Gathering in Amersfoort, May 19th. And I still have to search all the parts to complete the decklid, what isn´t easy at all! I would be happy to present in Amersfoort beside the rusty remains of the Samba at least the completed decklid and the completed dash. That would be a little proof that this project is something real. Stay tuned to see if we will be able to reach this little goal.

One thought on “A fresh dash”