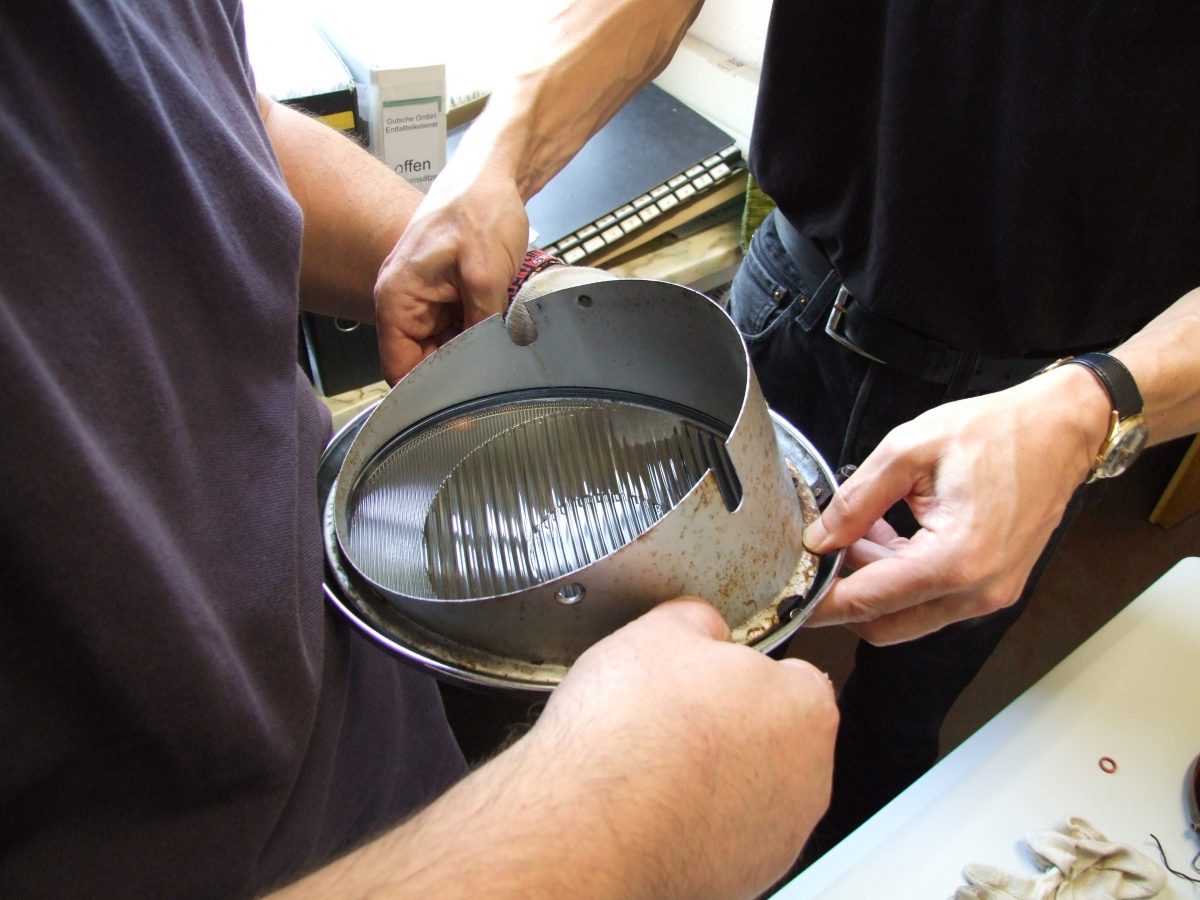 today I was assembling the headlights for the Samba. Nothing special? Well, it seems everything is special when it comes to early Barndoors and early headlights are a scientific matter anyway. So before the assembly could start there was a lot of research to do. Maybe you like to share what I could find out so far.

On the poor rest of the Samba´s front panel there was a Bosch headlight ring. But the 1951 Bus spare parts catalog and still the 1954 one do list Hella headlights only. This is quite interesting, cause the split window bug had, same as all following beetles, either Bosch or Hella headlights. VW simply had two suppliers of Type-1-headlights, same deal with a lot of other parts for early Volkswagen, the factory often had several suppliers for the same part.

But surprisingly VW had just one supplier for Bus headlights in the early years, minimum up to 1954, and this was Hella only. I learned this lesson to late, cause I already purchased a nice pair of symmetric Bosch Bus headlights, even with the little Bosch logo on the chrome ring –not correct for the 1951! Another amazing fact was that the early Hella Bus chrome rings are –due to the 1951 parts catalog- identical to the Bug headlight rings. So they are not specific for left and right, because they did not come with the little drain hole in the ring yet.

This fact made it a little easier for me to assemble a pair of headlights for the Samba as I have a nice collection of Bug symmetric headlight parts, Bosch and Hella. The conclusion of the 1951 and 1954 parts catalog was that the only Bus-specific parts for the headlights were the reflectors and the lens. But there is another tricky fact when it comes to Hella symmetrical headlights. Sure Hella and Bosch changed something here and there during the production of symmetrical headlights (they were superseded by the asymmetrical system in August 1960), but Hella changed much more than Bosch! Hella even changed the entire inner mechanism for example, but Bosch changed just some little details.

Also the reflectors of the early Hella symmetrical headlights and the late symmetrical ones are so different that you can´t interchange them technically. VW itself listed two different part numbers for Hella reflectors up to 1960. Also the super early lens has a very different design than the ones in the late 50s. But as I have a nice amount of NOS super early Hella Barndoor lenses, I did not have any reflectors at hand. I thought: ‘Damned, another expensive hard-to-find item on the list!’ But Dieter Schmidt-Lorenz could help with a NOS pair of these reflectors for a real good price. He surely made my day. 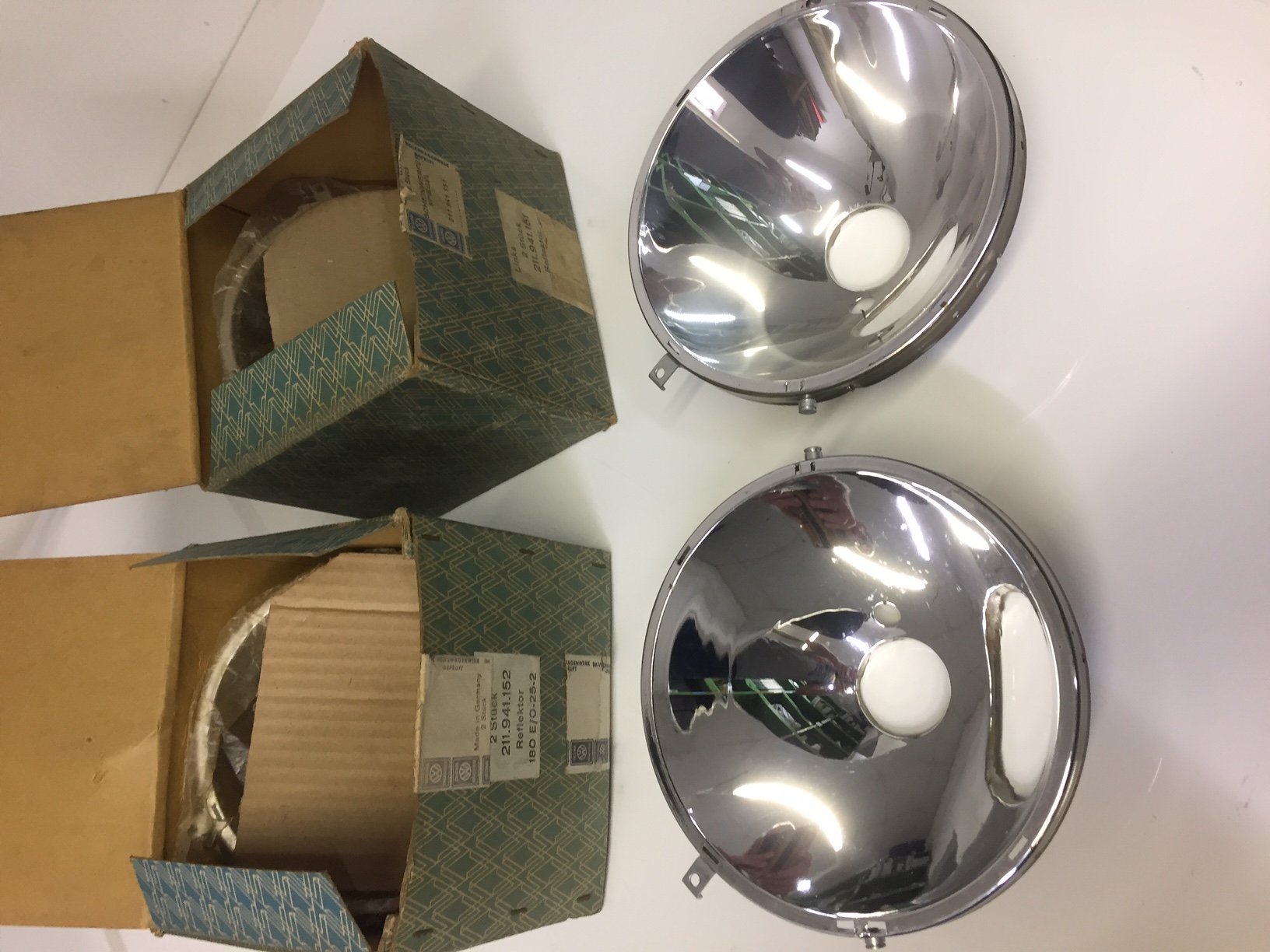 Dieter´s reflectors. Always a moment of history using parts which were stored the last 50 years untouched in their original box….

New original Hella lens seals we do have in stock, so the assembling could start, but there was one last question to clear. Did Hella used in August 1951 still the “Hella”-logo on the chrome ring? I have a nice bunch of both styles, with and without the logo, in stock, but I needed another lesson in VW detail history. After some research in the net I was very sure that minimum up to 1952 Hella headlights always had the little “Hella”-logo in the chrome ring and the little fixing bracket of the chrome ring was mounted with just one rivet, not with two as later on. 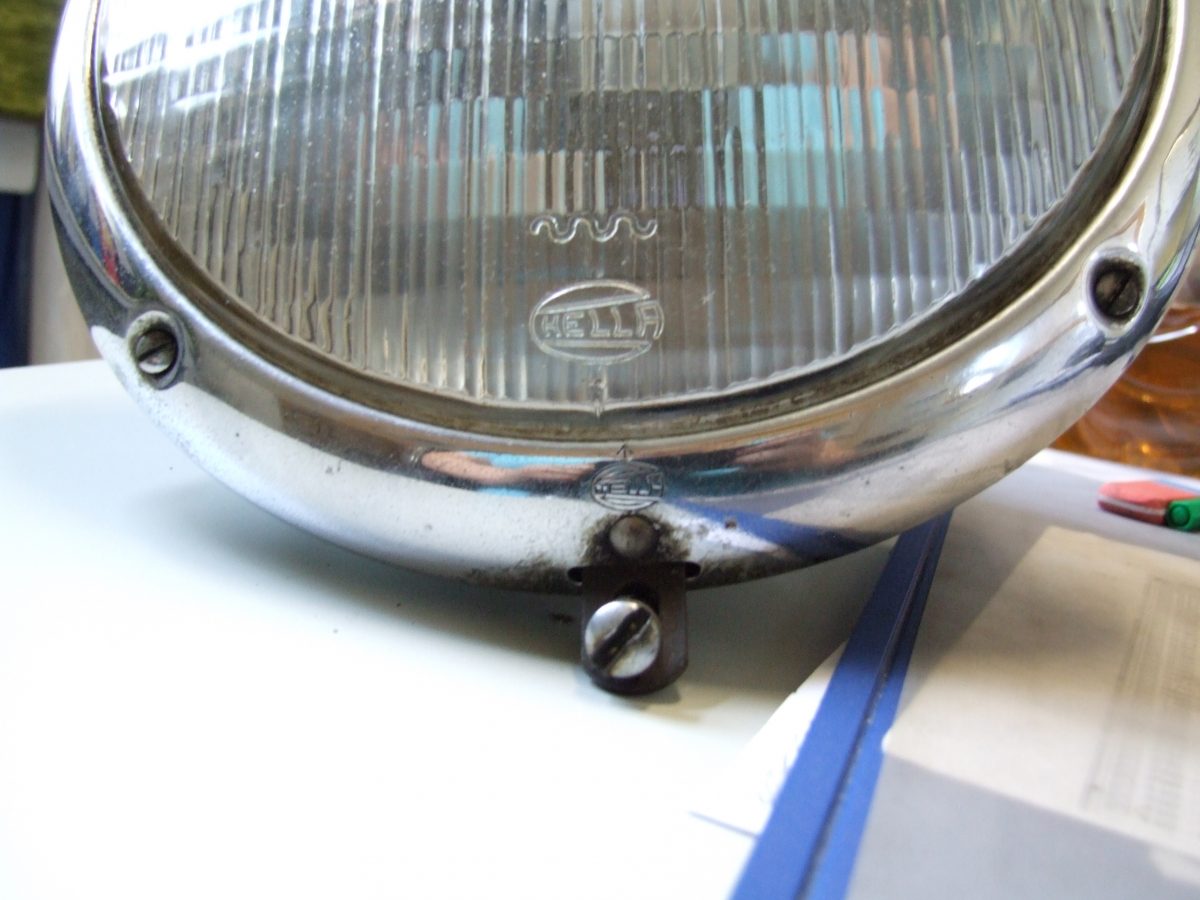 “Hella”-logo in the chrome ring, fixing bracket mounted by just one rivet and a half round head screw: this beetle headlight assembly should be the right one to convert it into a headlight for our ´51 Samba.

Not tired about headlight details yet? I can continue for another little while…. 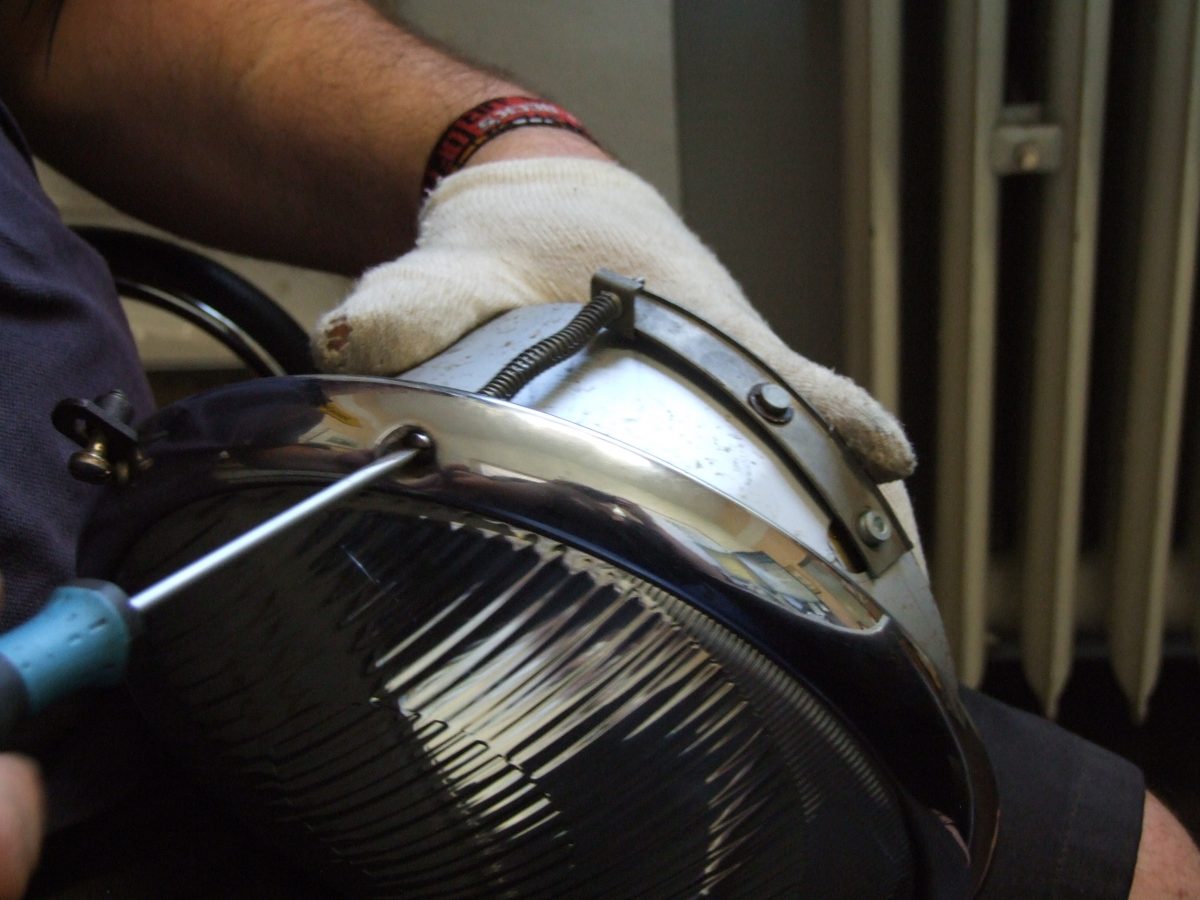 Here you see the bracket that moves the reflector when turning the adjustment screw. This is specific for super early Hella headlights.

Confused? Well the story is even more complicated! There were also reflectors for the early mechanism made of tin! As VW offered reflectors for the early symmetrical mechanism at the spare parts counter for a longer time, these ones were made by Hella in the very same material then the current production: just tin, not brass anymore. The reflectors I purchased from Dieter Schmidt-Lorenz are such ones: early symmetrical style, but made of tin. If you see it from the pure historical point of view, the headlights I assembled are not super-correct, cause they don´t come with brass reflectors. 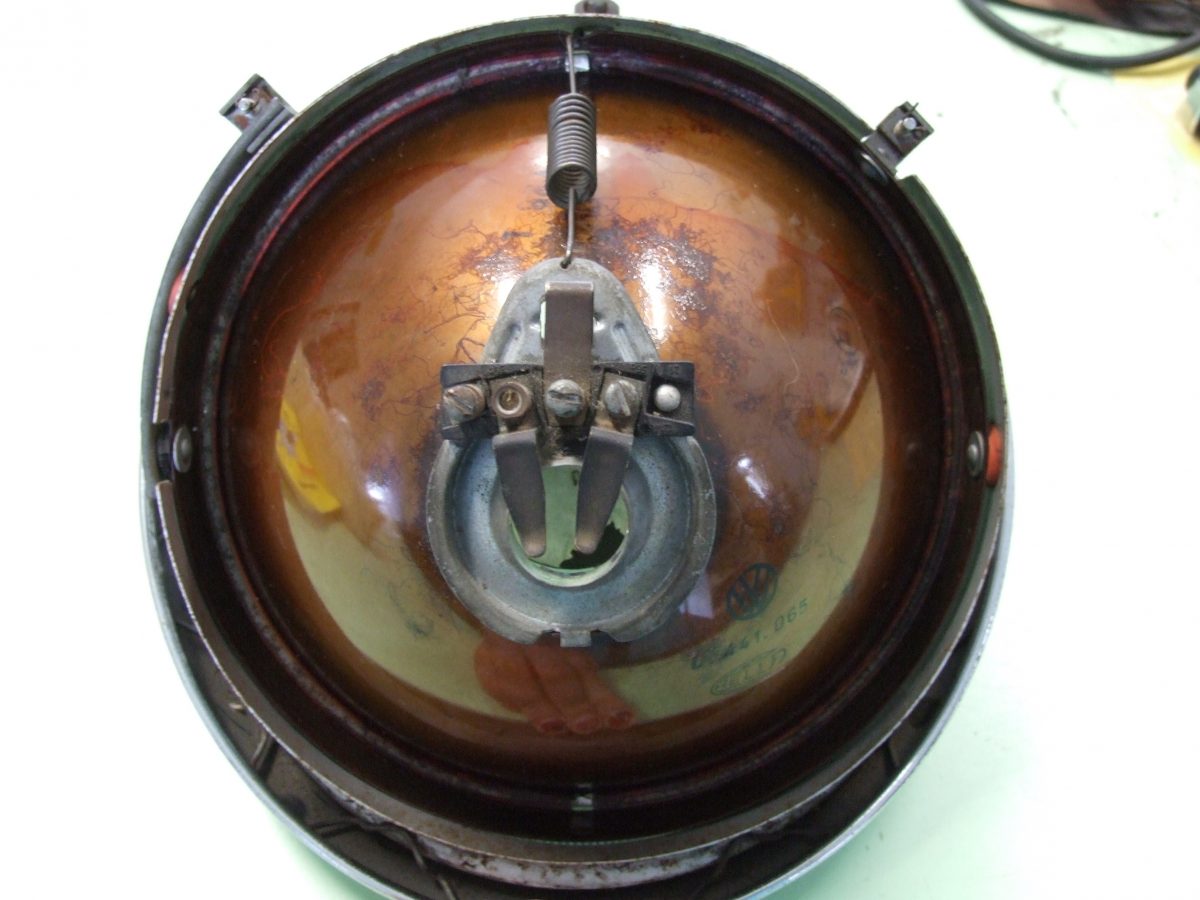 A reflector made of brass, but unfortunately a Beetle reflector, not a Bus one.

A reflector for super early Hella Barndoor headlight, but made of tin. As you see here a part number using already the new nine-digit-system (established in 1954), this reflector was not made for the production line, but as a later spare part production

Anyway, I am really picky about originality, but I can live with tin reflectors made somewhere in the late 50s. I think to assemble a pair of headlights with the correct 1951-only-lens, the correct “Hella”-logo-ring and the pre 1953 old mechanism is good enough for this Samba. 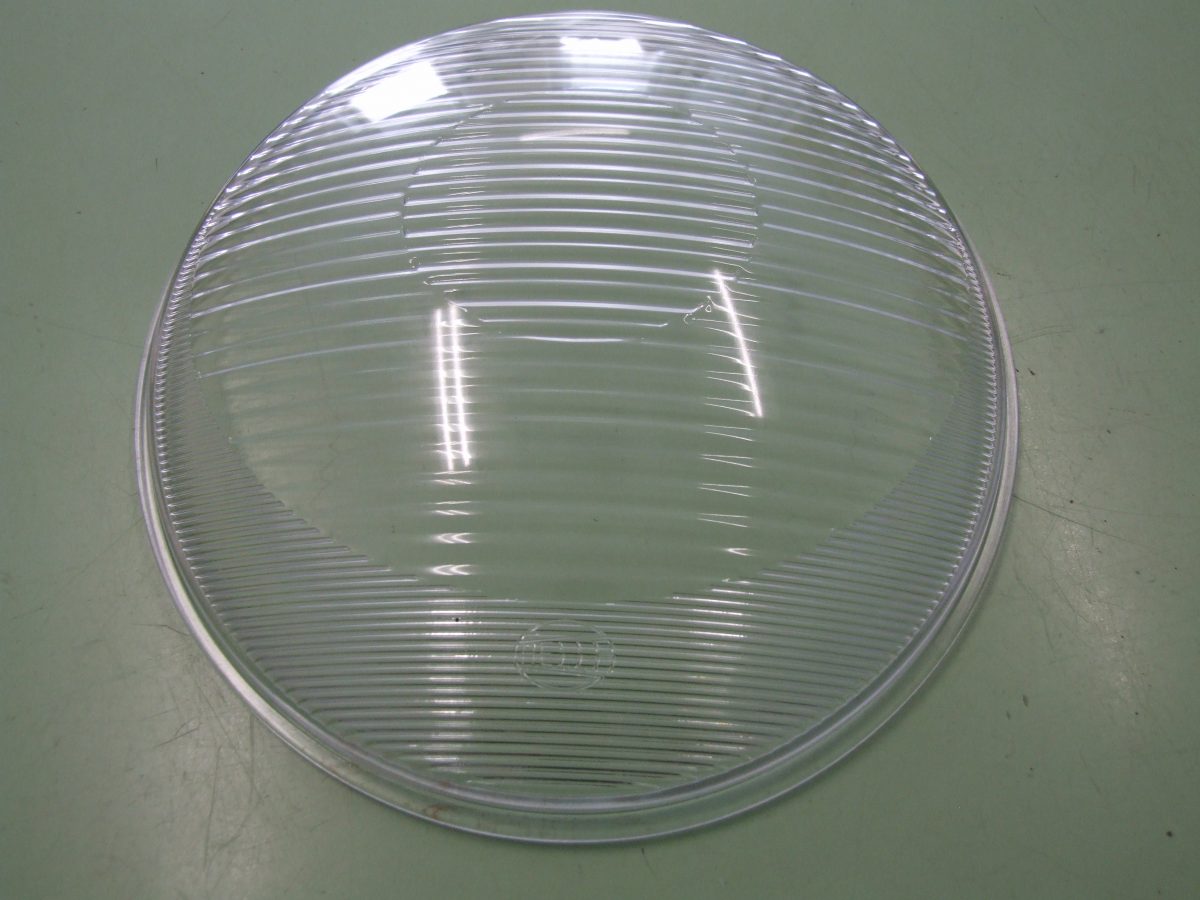 the correct pre 1952 lens for Barndoor 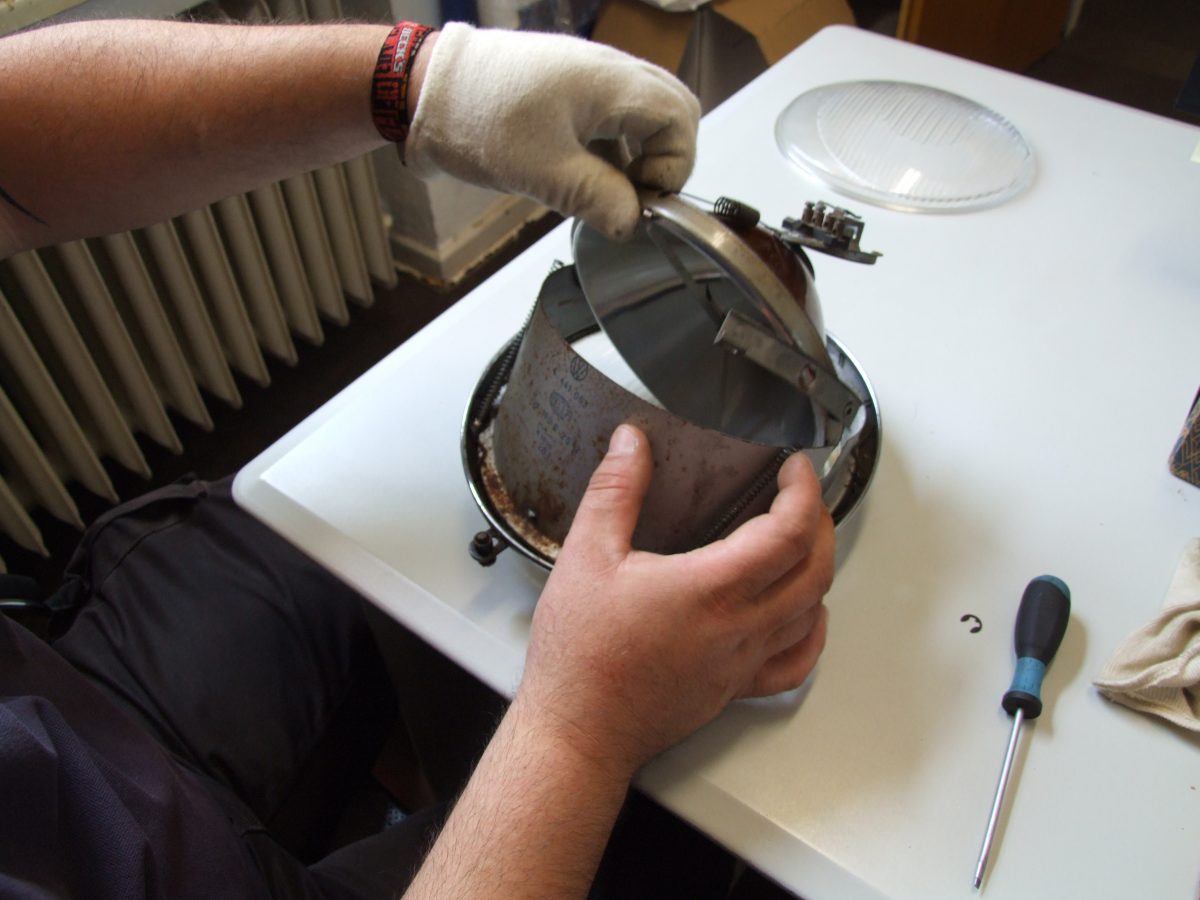 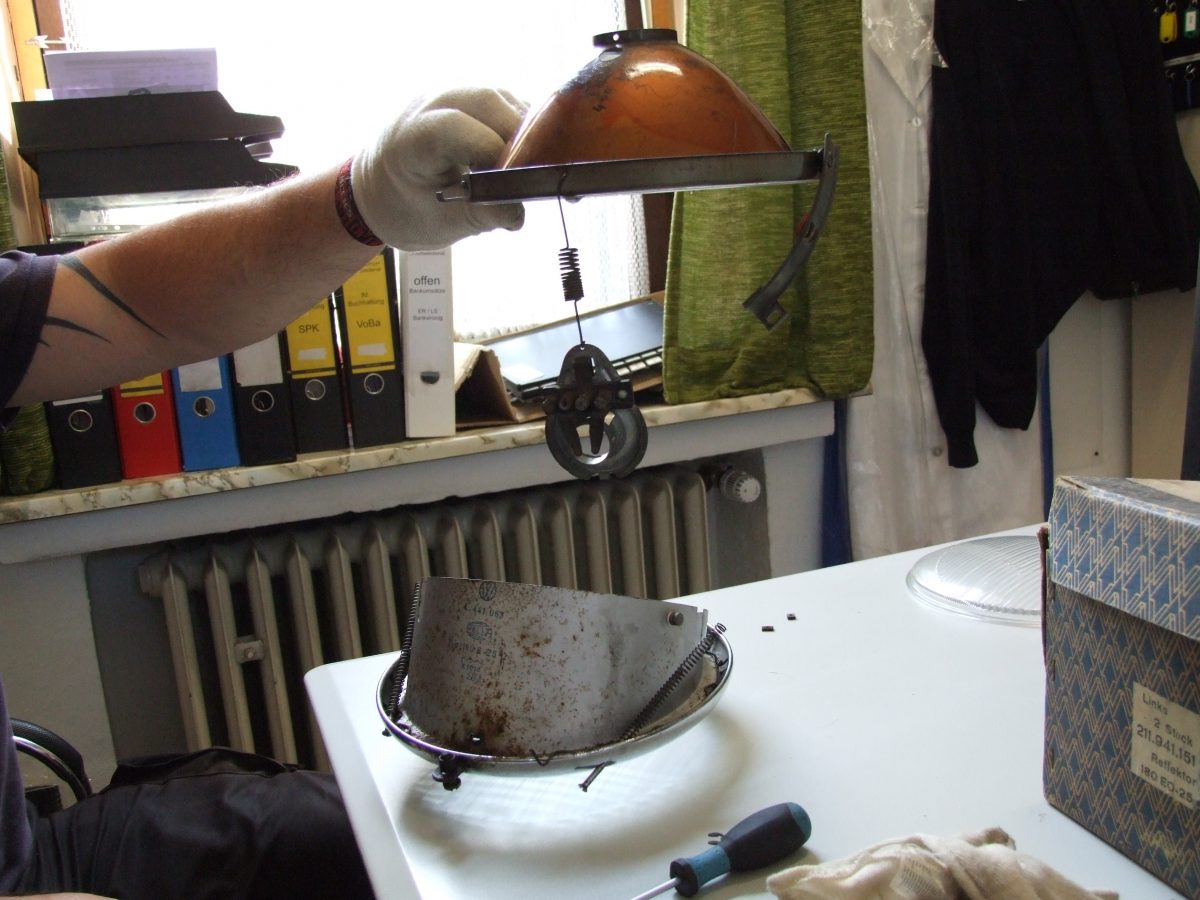 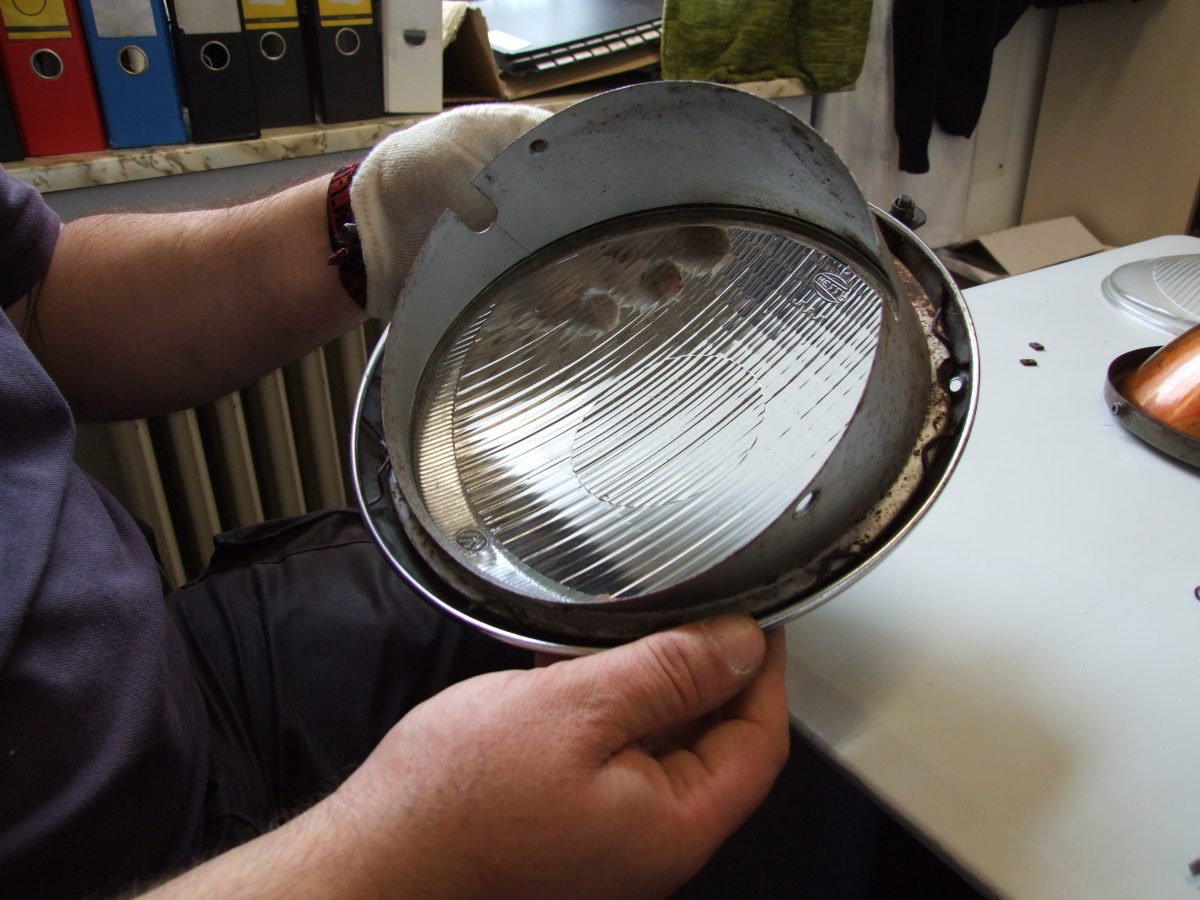 And now remove this long one-piece-spring, Sebastian! A pain in the ass to remove it? Well, wait until you have to put it in place again…. 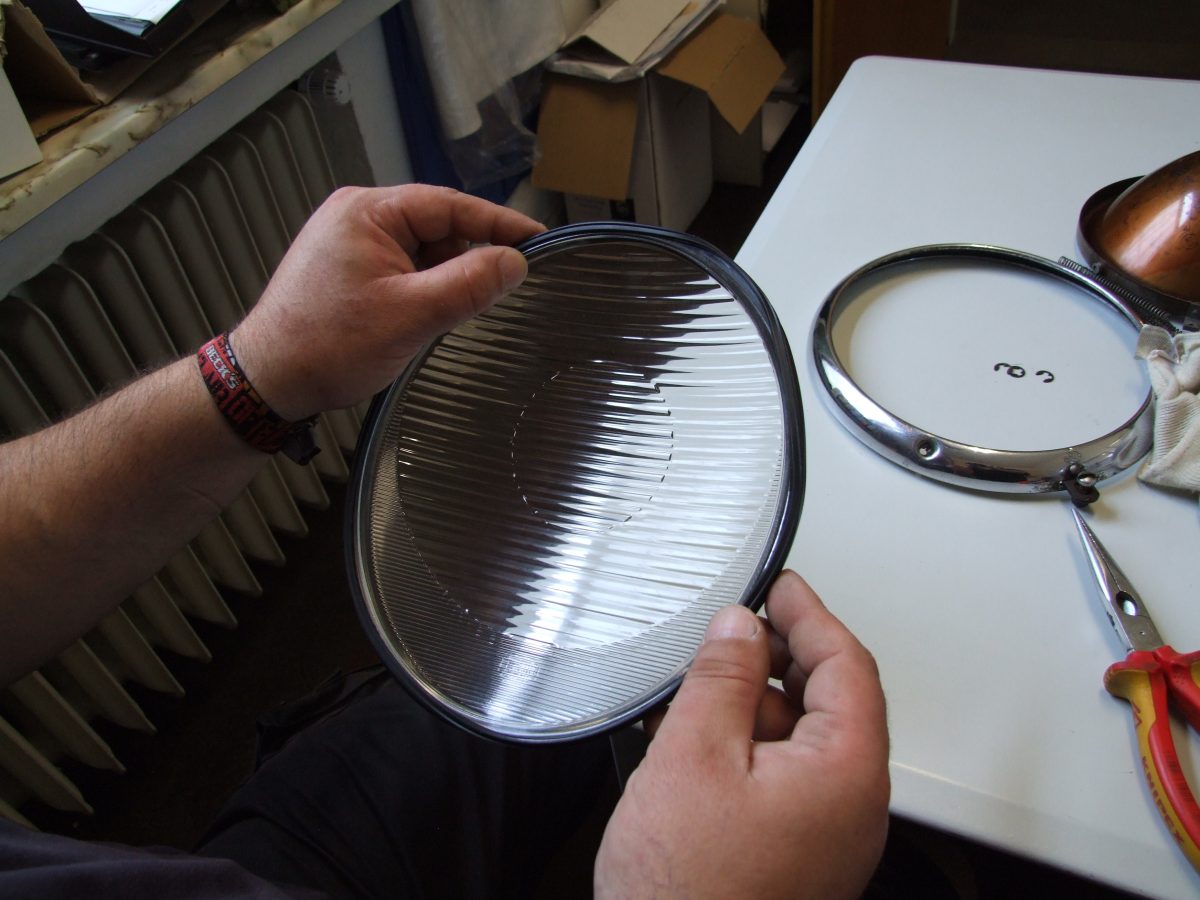 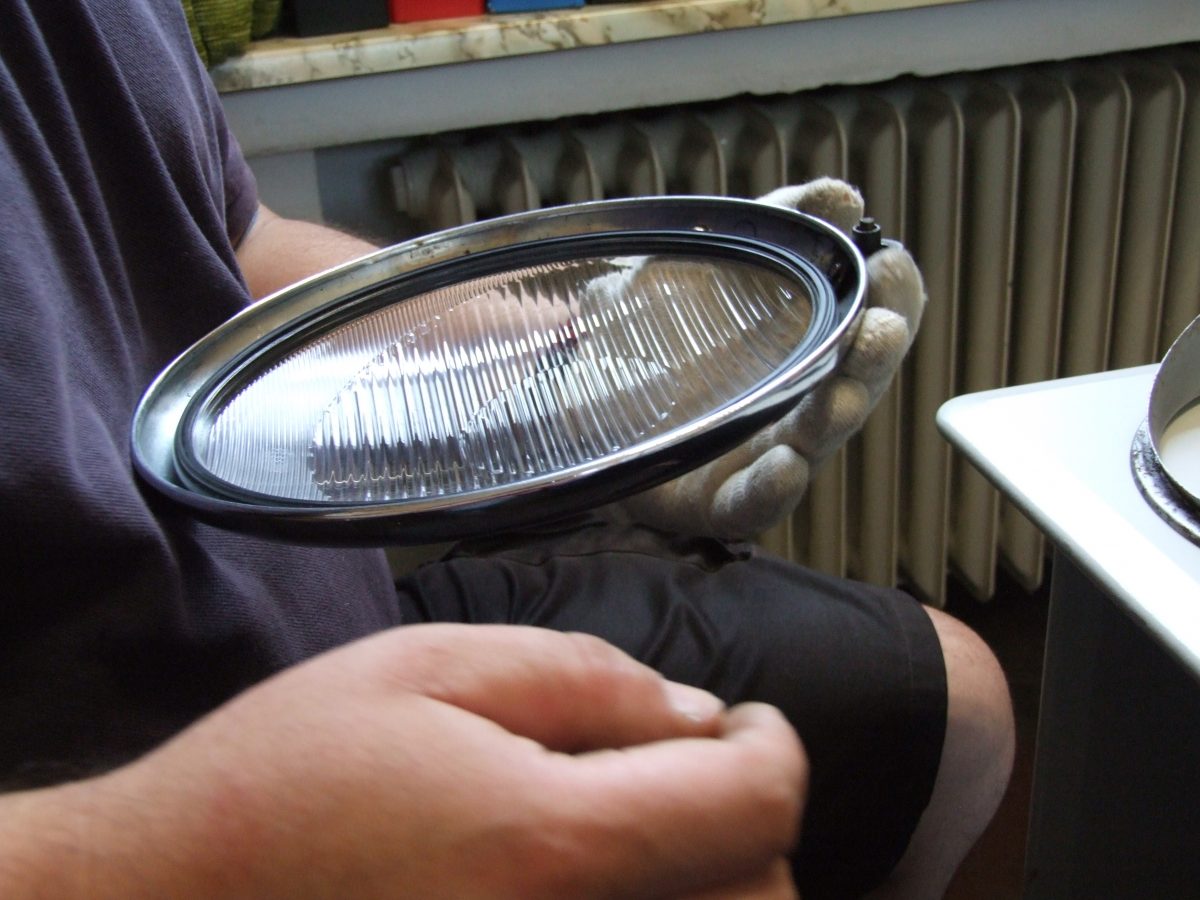 Putting it the lens in the correct position

Next step: putting the reflector bracket in place…. 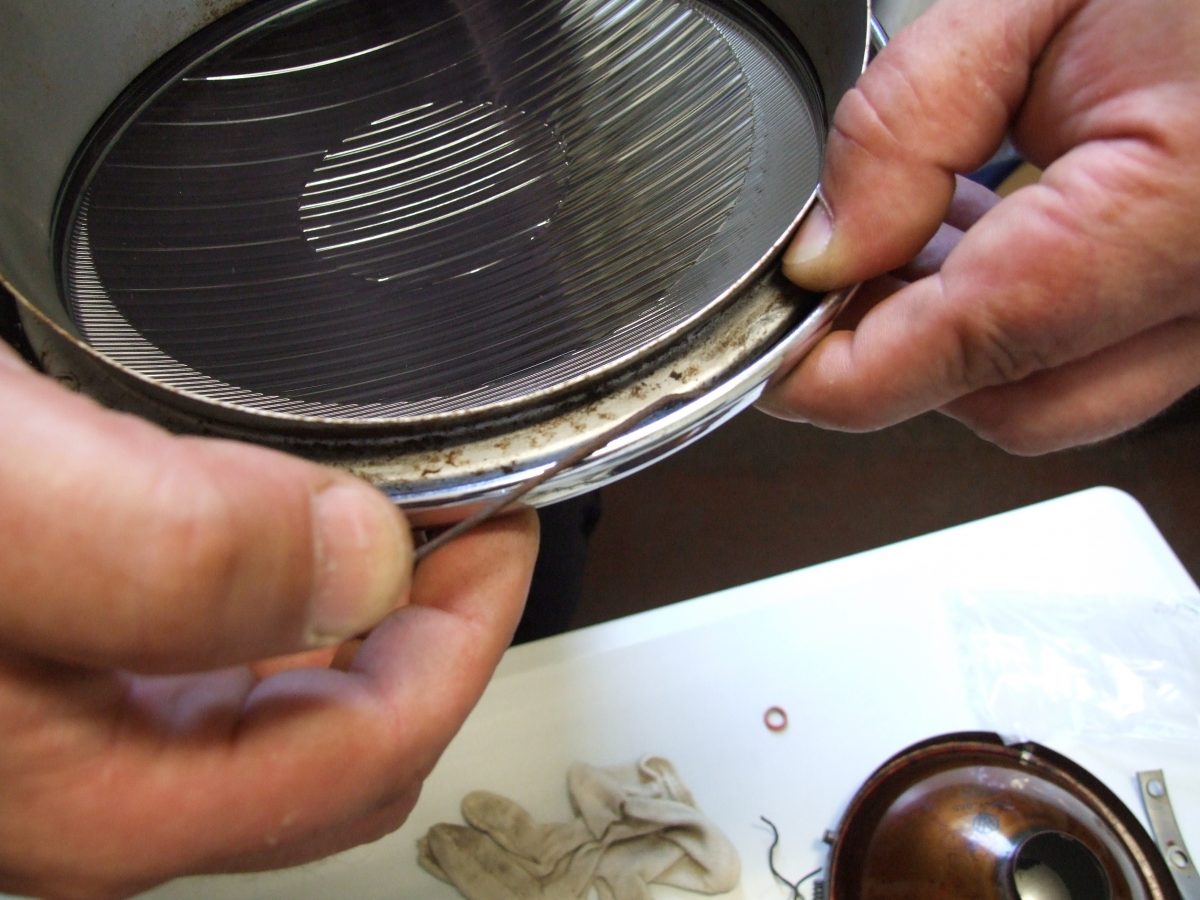 A little trick: we used some of the new style springs to fix the whole assembly on one half to help holding everything in place. Now we ccould try to put this damned one-piece-spring in place on the other half….

But still a pain the ass! Sebastian was right to refuse this job and leave it to me….  I won the fight in the end, but I had to try again and again. Whoever constructed this one-piece-spring, he was not the smartest Hella employee, for sure! The next worker telling me that putting the (late style) fixing springs in place is a tough job, has to try it with one-piece-spring! 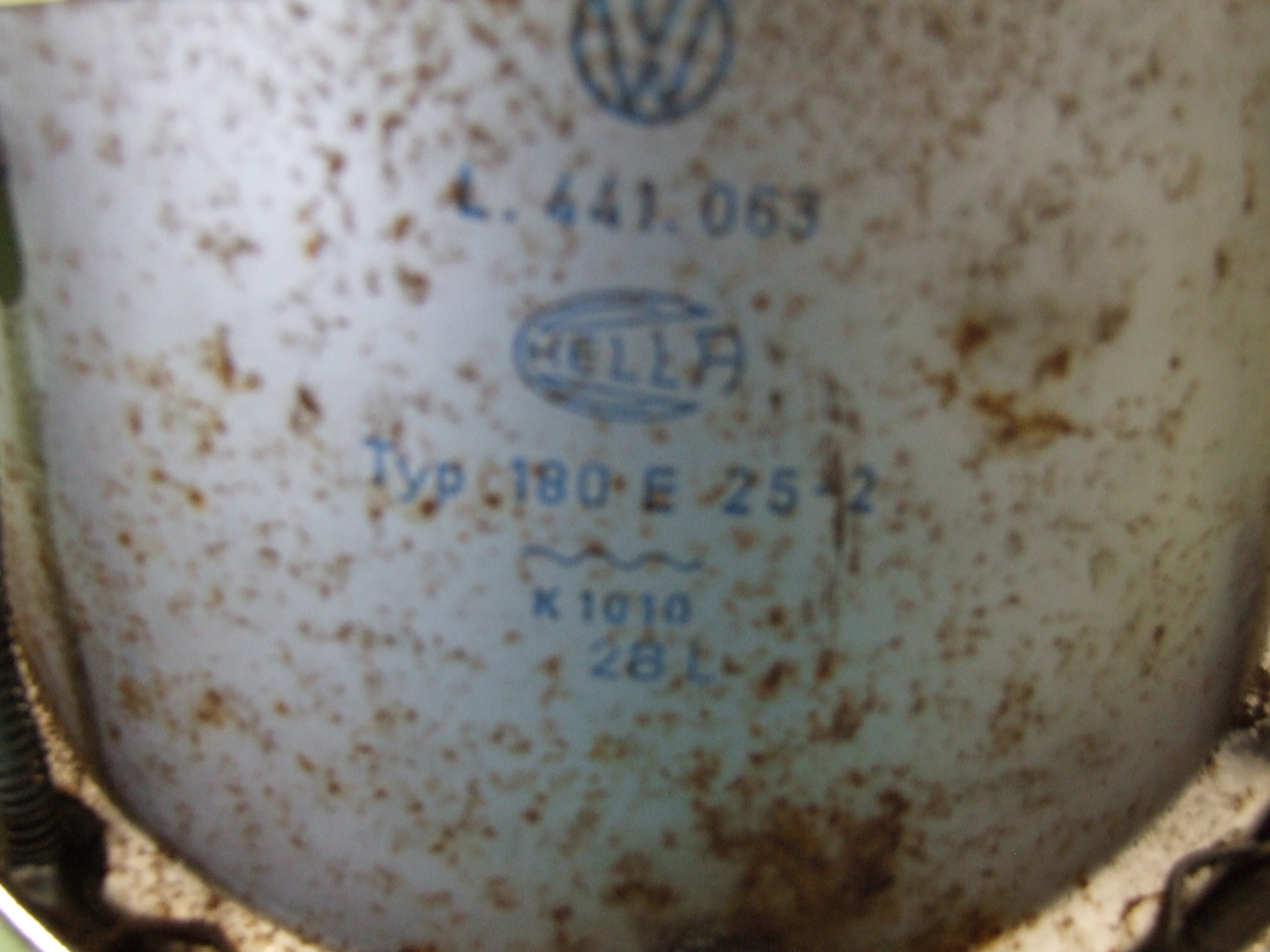 Did you know that? The “L” in the line “28L” indicates the year this headlight was produced. Due to TheSamba.com “L” means 1953. Good enough for the project from my point of view! 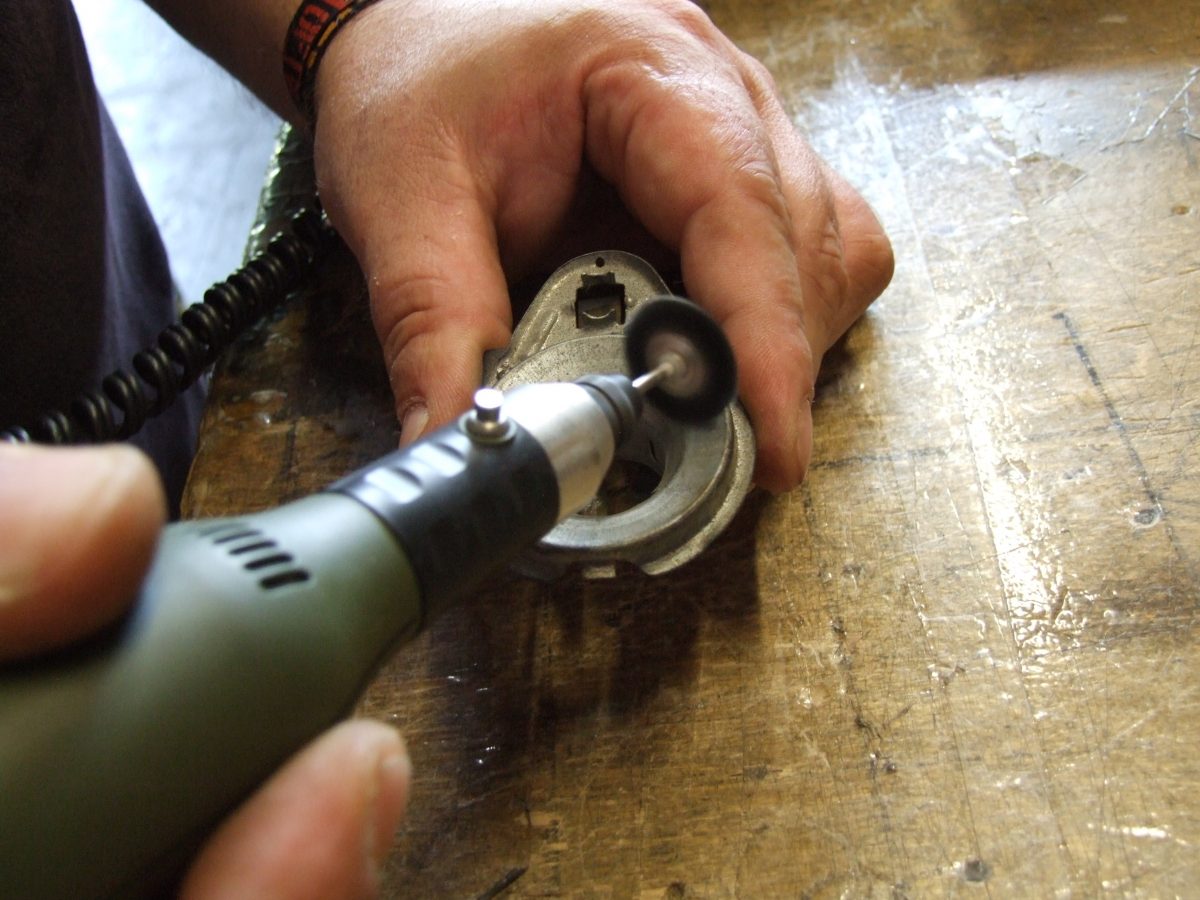 Cleaning the bold holder is essential if you want your six Volt headlight to produce some brightness. When the ´51 will be finished in 15 years I will be 63, so having a bright headlight would be a good idea! And for sure I still won´t be in the mood for an unsporting 12 Volts conversion….

Ready for installation. Thank you, Sebastian, good job! So we are ready now, what about you Mark?   🙂

We don’t want this reconstruction to end up showing the car the way it left the factory in August 1951, we want a Bus showing its history. In 1961, when the Samba was taken from the road, it already had a changing in the headlights to Bosch, so for me it´s fair enough to give the Samba back its early Hella headlights. I leave the lack of brass to the haters to make their lives less miserable….

For all the rest: enjoy life and the rest of the summer!