if you checked out the Samba in Amersfoort you might know it. There is no mastercylinder mounted yet. We were in a real hurry to get the baby kind of drivable for the show anyway that we decided it´s OK to rely on the handbrake only, I was not in the mood to drive the fragile Frankenstein at a speed higher then 10mph.

Beside the lack of time, we didn´t had the mounting bracket for the master at hand.The bracket you can see in the following picture, taken from the 1953 workshop manual: 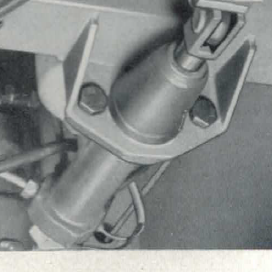 When the Samba was found the original master was still present, but it was stuck in the mud, felt off from the chassis decades ago, just have a look. 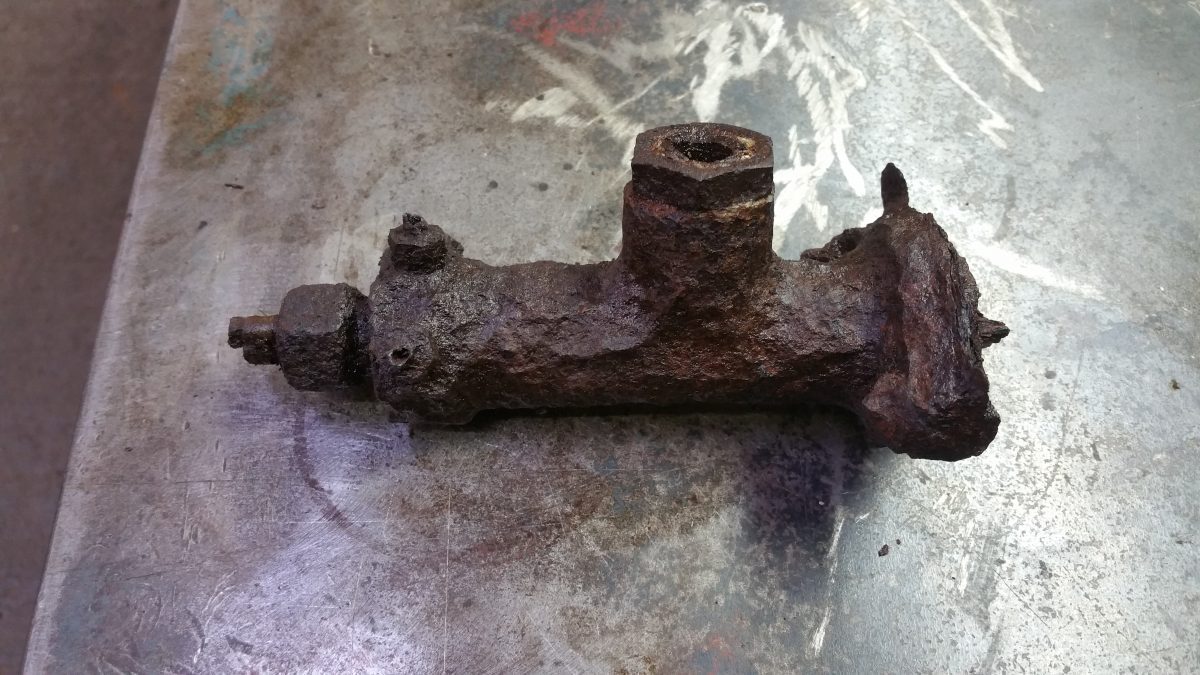 Check out the following pictures. They proof that there is a very little piece of the bracket still screwed to the master, but that´s all. It´s not enough to rebuild or reconstruct it, this one does not even give an idea how the bracket has to look like. 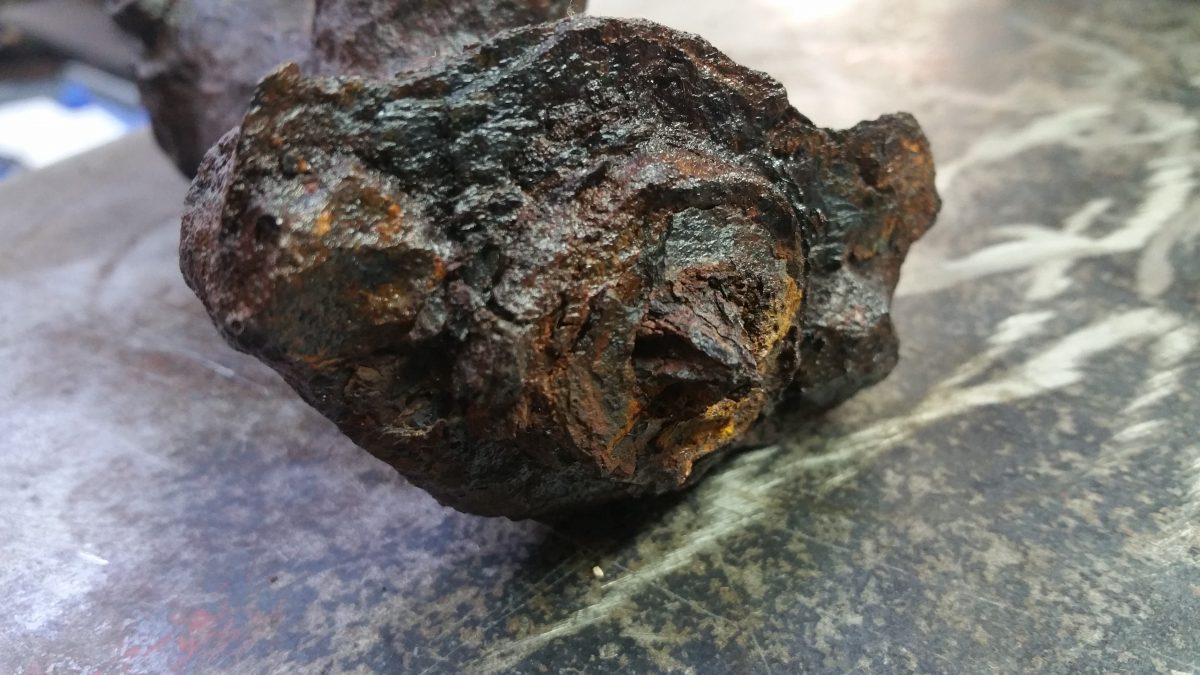 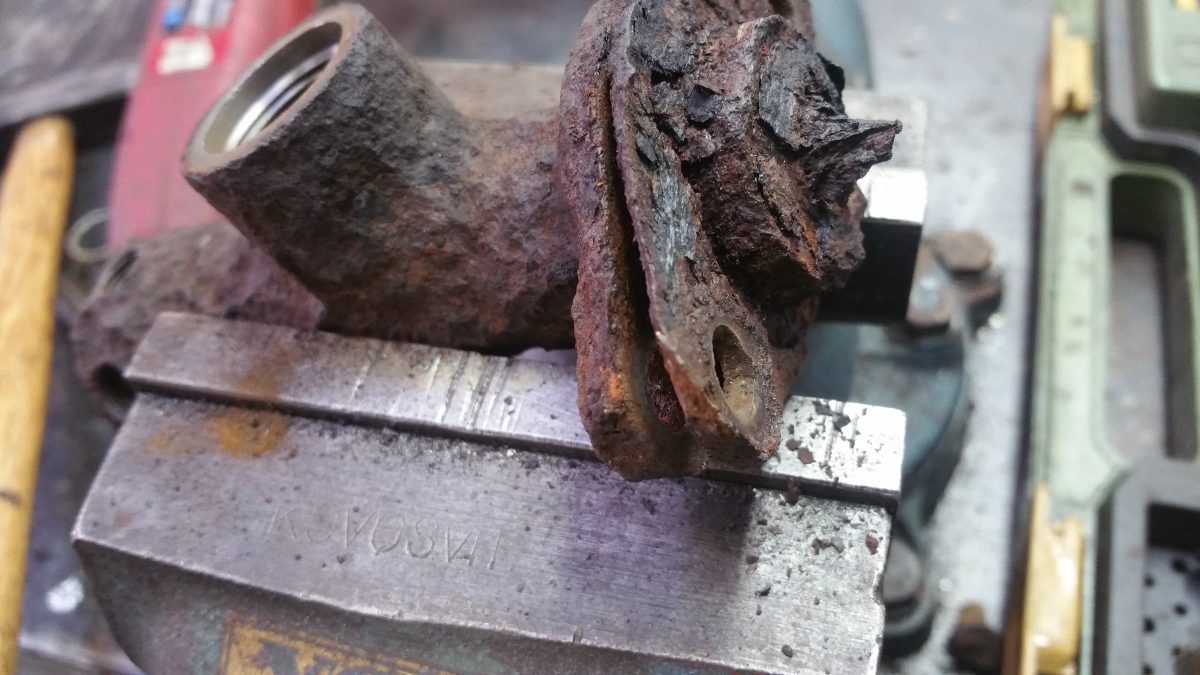 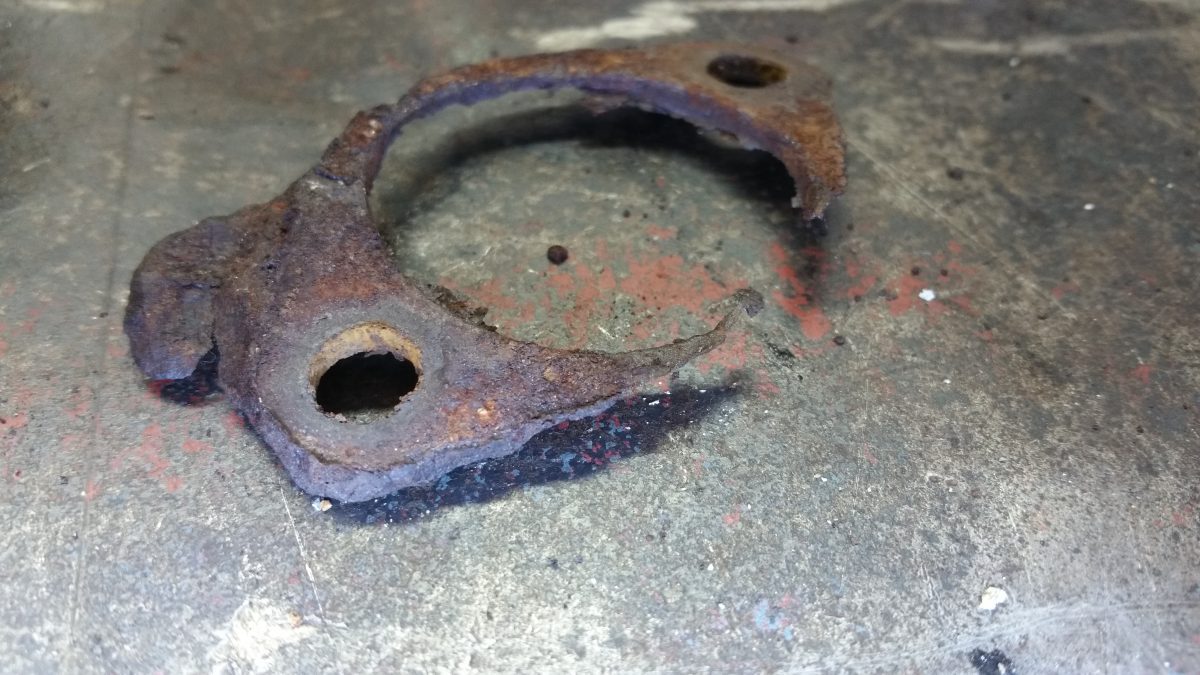 So, what to do? The master we can replace by a VEWIB-item in case it´s not possible to save it, but the bracket we need to find elsewhere, cause it´s not an item you can find in any VW parts shop. But I had an idea…

It was in 1988 when my close school buddy Christian Kuhlmann told me: “Hey, Florian, I found this super old bus in the woods near my village. It still has its semaphores, didn´t you say you need a set of semaphores for your ´58 bug?”

So I checked this Bus in the woods, not even 10 kilometers away from my parent´s home. It was a 1956 deluxe and indeed it still had its semaphores. I pulled also the engine and the gearbox, the other parts seemed to me not worth saving. Today I would save the entire Bus, no doubt, it wasn´t too bad, but in 1988 there were a lot of VWs in the local woods that were much more of my interest.  Several ovals, a split bug, even a 1943 KdF (I decided this was too rotten to save, can´t believe today….). If you wanted a nice ´56 bus in the 80s you just had to go over to the next fire brigade asking them to sell their 8.000 km bus for some hundred Deutsch Marks and that was the deal, no kidding. A ´56 bus wreck in the woods was….well, just a piece of junk!

Anyway I remembered this certain Bus and wondered if it was still in the woods and if it still got the mastercylinder bracket…. So, I drove there and my teenage pupils shot this funny video about it:

Mission accomplished ! Here is the master from the bus out of the woods. Now let´s get the bracket off here to send it to Mark, who will add the bracket to the Samba´s chassis. 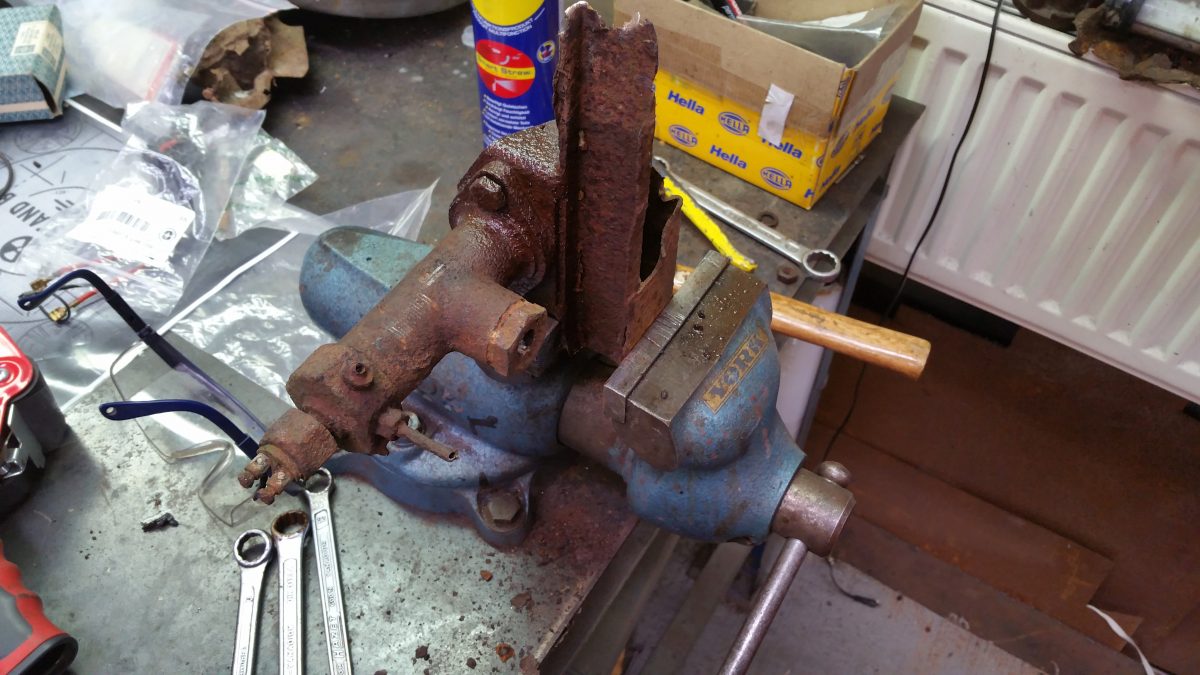 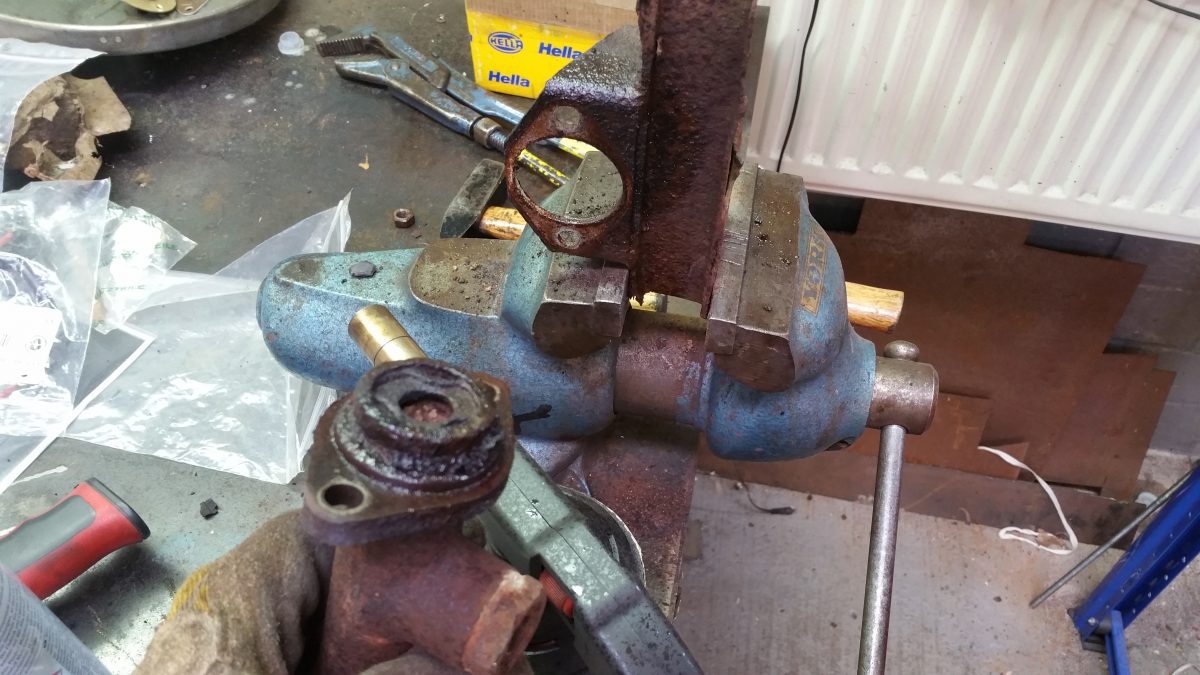 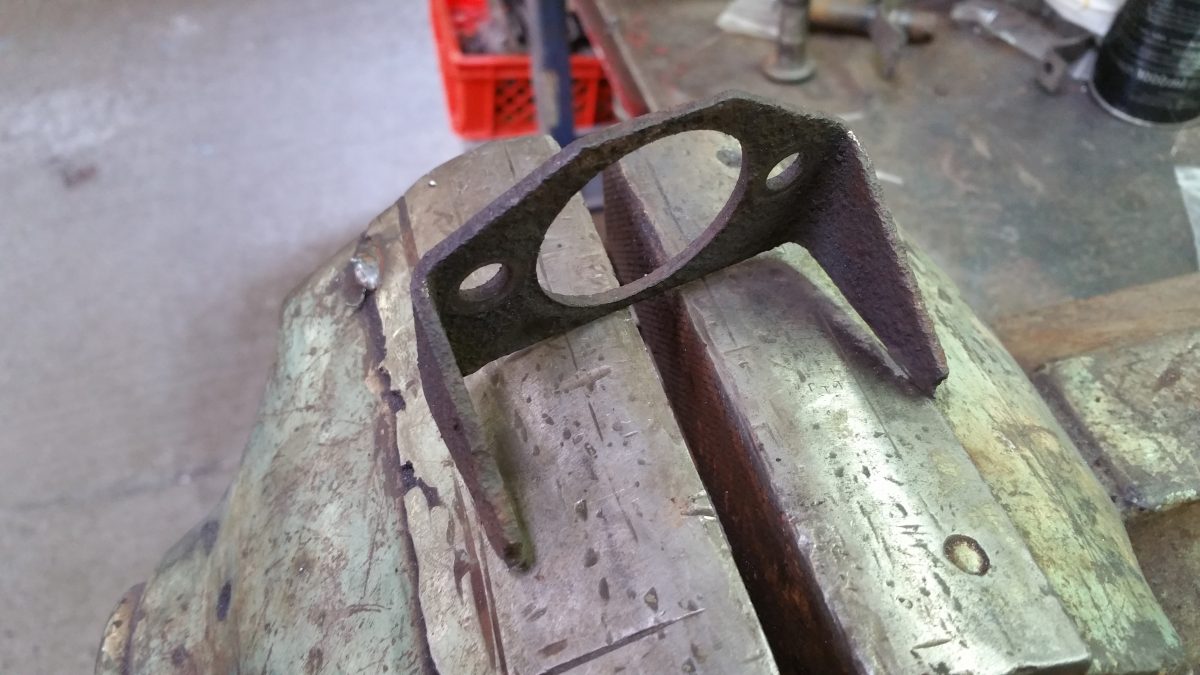 OK, now we got the bracket let´s see what we could probably do about the Samba´s original master itself. We were lucky enough to lose the brakelight switch, the brake line nuts and the fixing screw of the fluid container with the help of rust resolver and heat. But after removing the remaining of the fixing bracket we had to realize that the area where the operation pin slips in is seriously damaged or to be exact: lots of this area is simply gone. Just compare in the picture below this end of the Samba´s master to a “regular” used master of the very same year. There is no groove anymore to slip the rubber protecttion boot over.  The entire end of the master is gone by the rust. 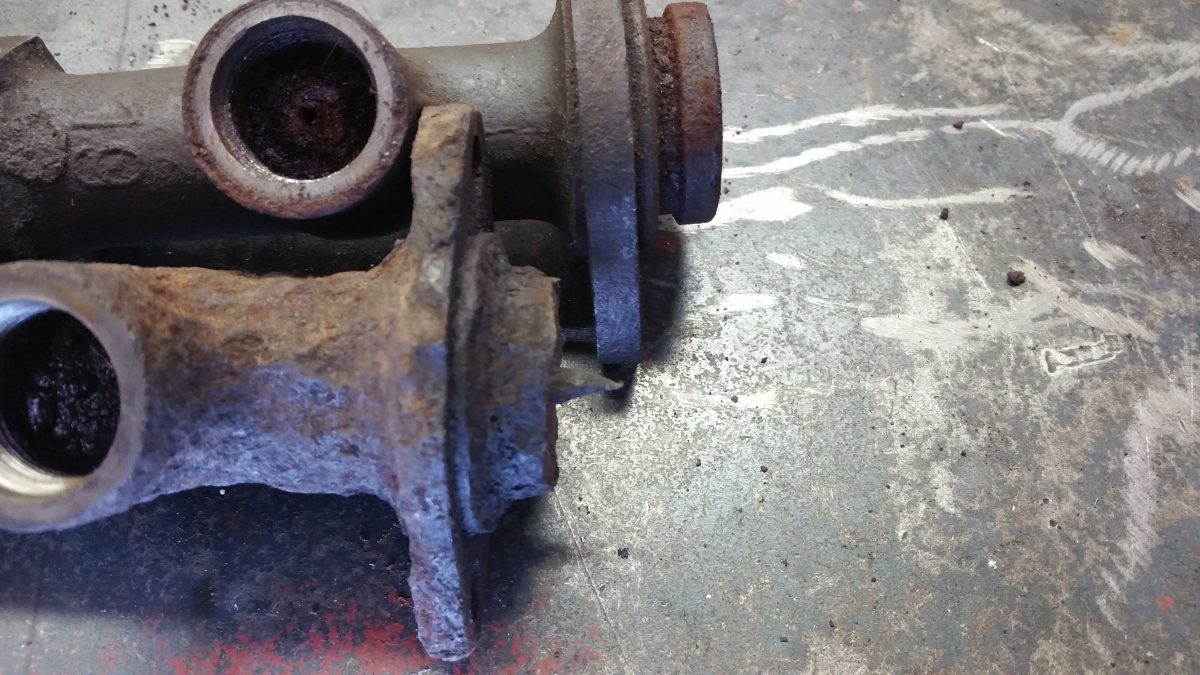 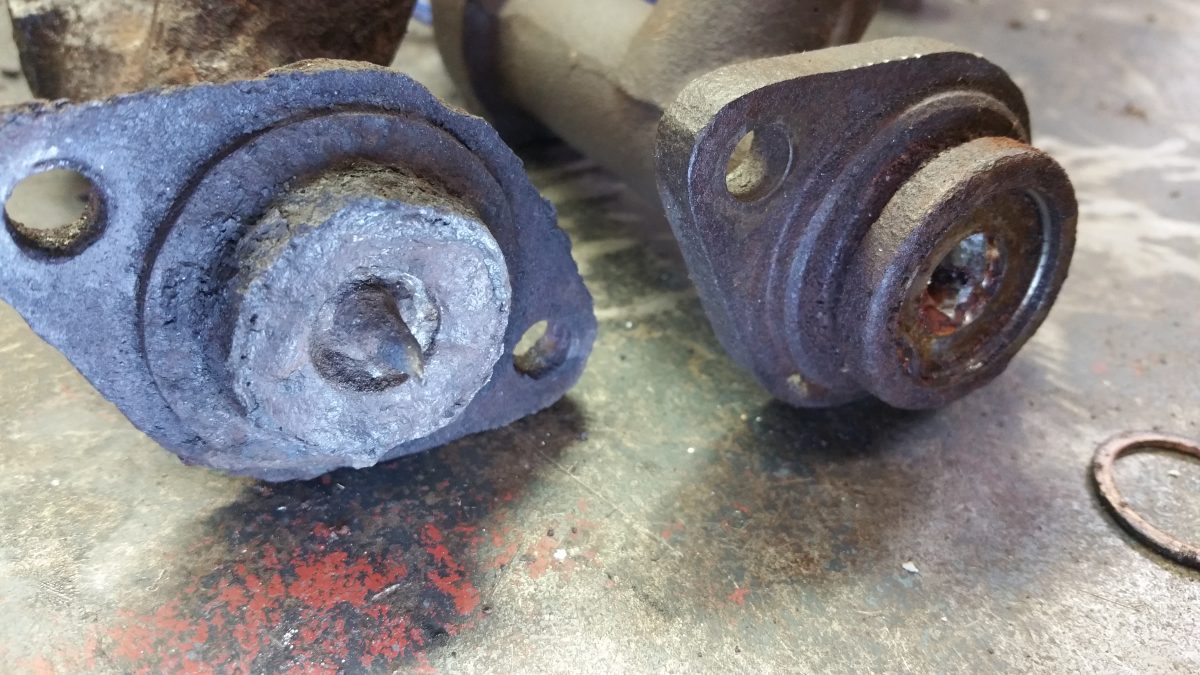 At this stage of rust damage even I have to surrender and grab in my shelves for a brand new VEWIB pre ´53 master cylinder (yes, we got this babies in stock and –yes- they are made at the OE-place, no China, no India, no Brasil, real German made!)

So the original master itself might be beyond saving and so is the brake light switch, but let´s see what we can do about the fixing screw for the brake fluid container. 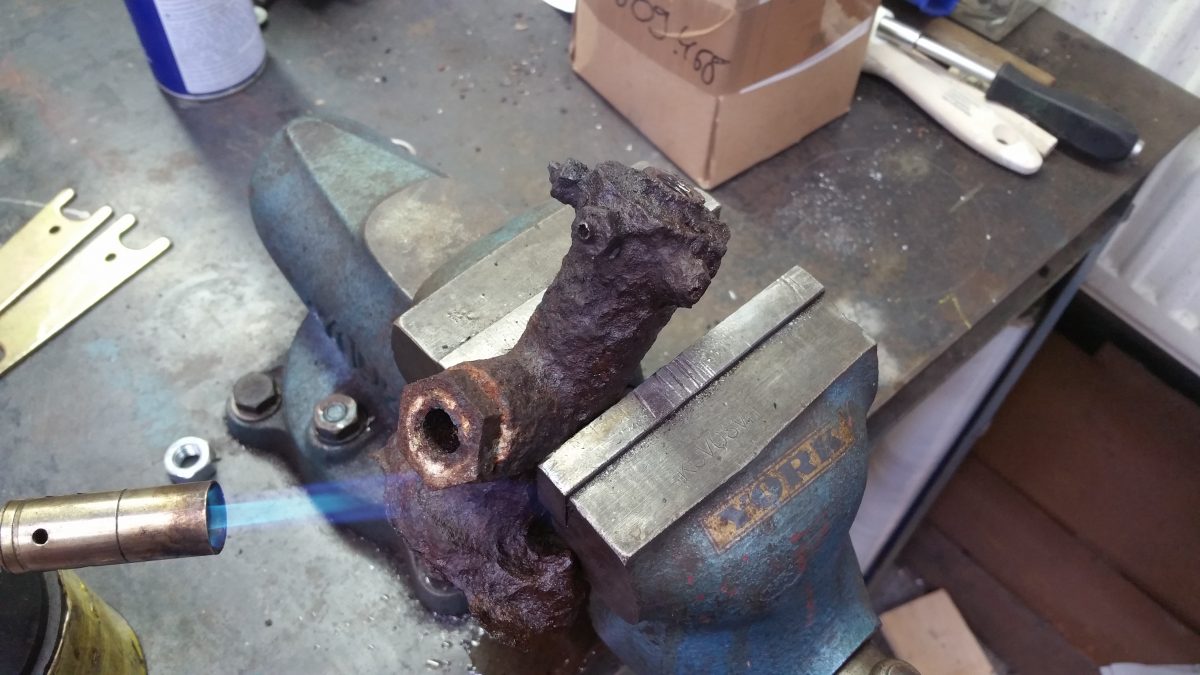 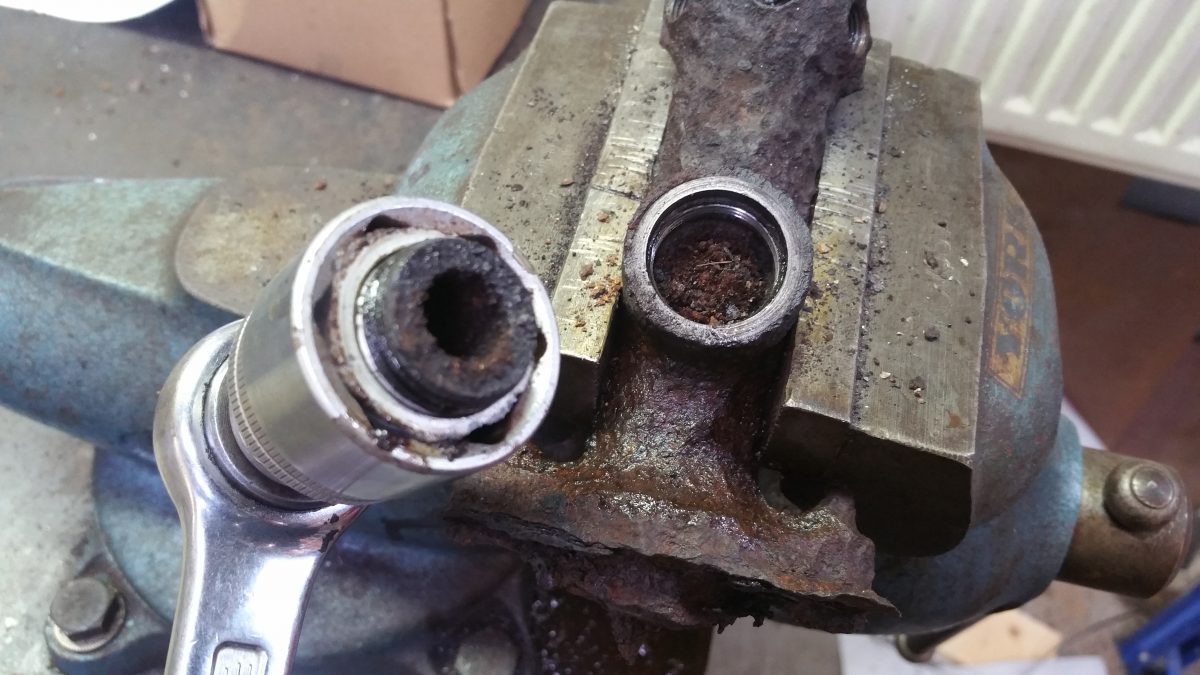 The screw itself is reusable without any doubt, but did you know that the screw had a thin, fine sieve in the middle to protect the master against possible dirt in the brake fluid? You can see this sieve in this drawing: 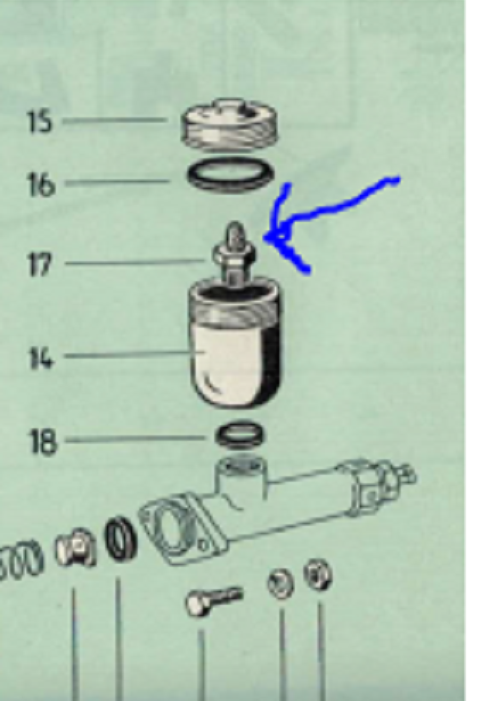 Sure this thin sieve was gone entirely by corrosion, there was not the slightest remaining of the sieve! We had to construct something here. When I started the VEWIB-production of the late Baywindow brake fluid container with the OE-supplier of VW Brasil, we were in the need of a similar sieve and I found the original supplier of it. We made a couple of thousands sieves for the Bay´s fluid container, here is a picture: 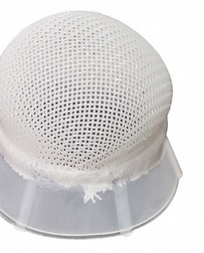 Yes, it´s made of plastic, not metal, but maybe that´s good when we try to modify it for our Samba´s master? By cutting the edge of the sieve we could make it the correct size for our purpose. But how can we fix it to the screw? Glue won´t be good idea, cause it won´t stand the brake fluid. The solution was easy. We heated up the screw and just placed the sieve on the hot screw. The edge of the sieve melted a little bit and slipped this way into the hole of the screw. After cooling down it sat perfectly tight to the screw. Doesn´t it look nice? 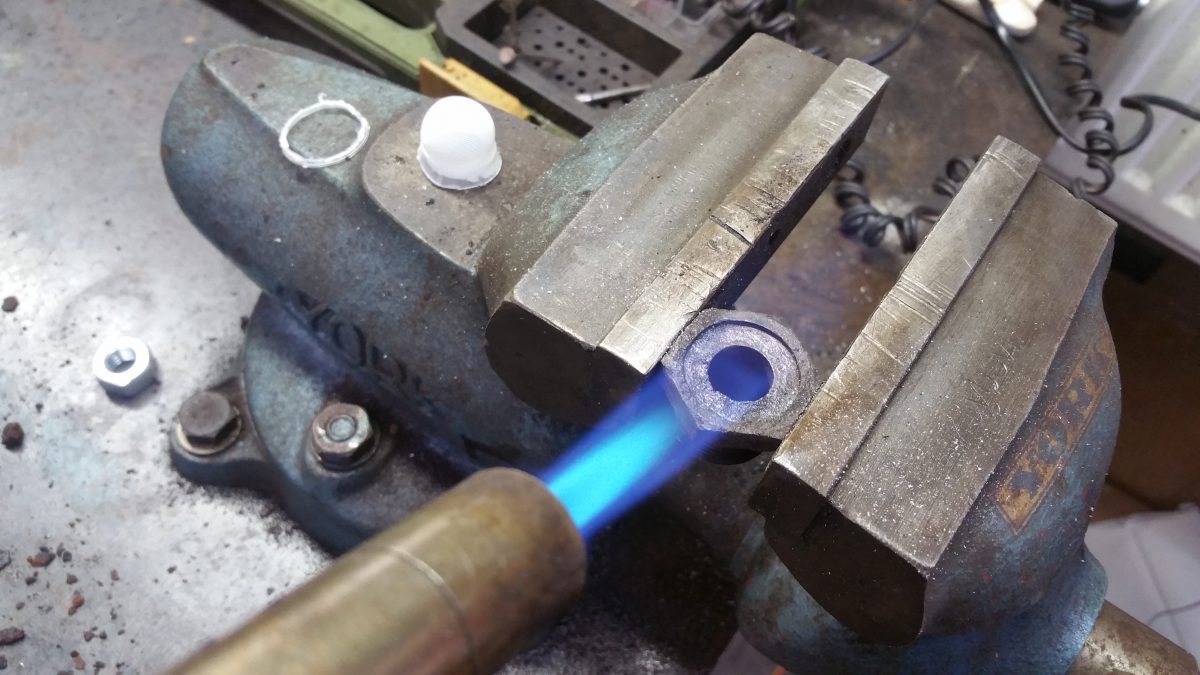 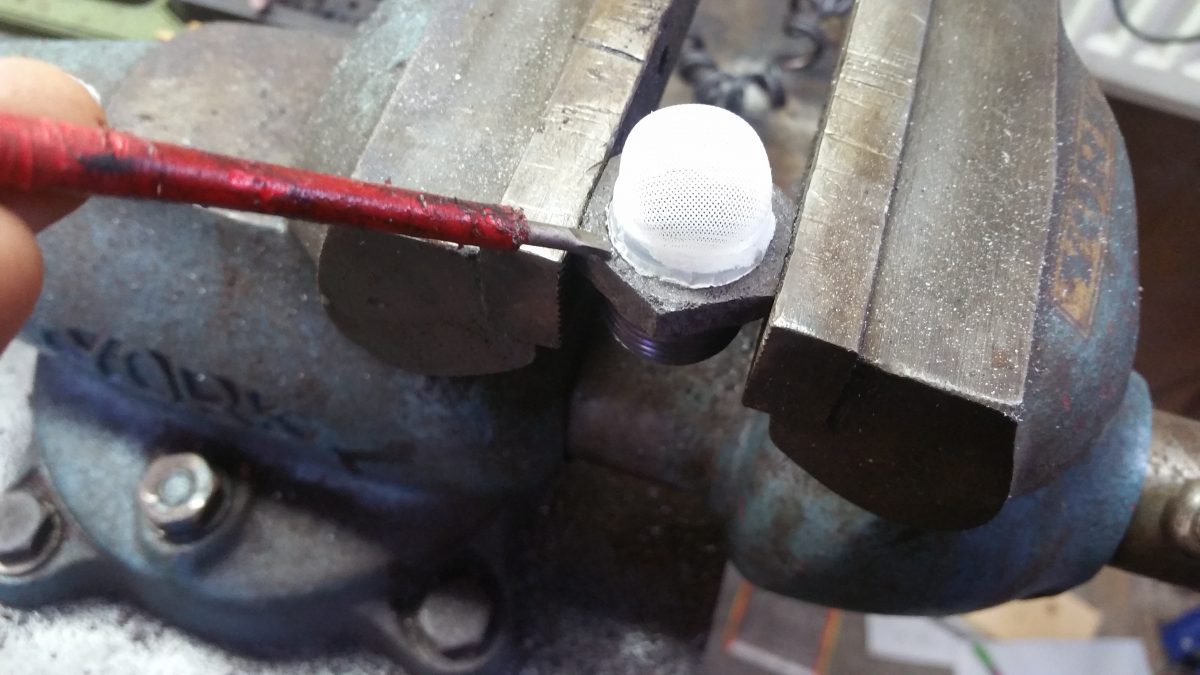 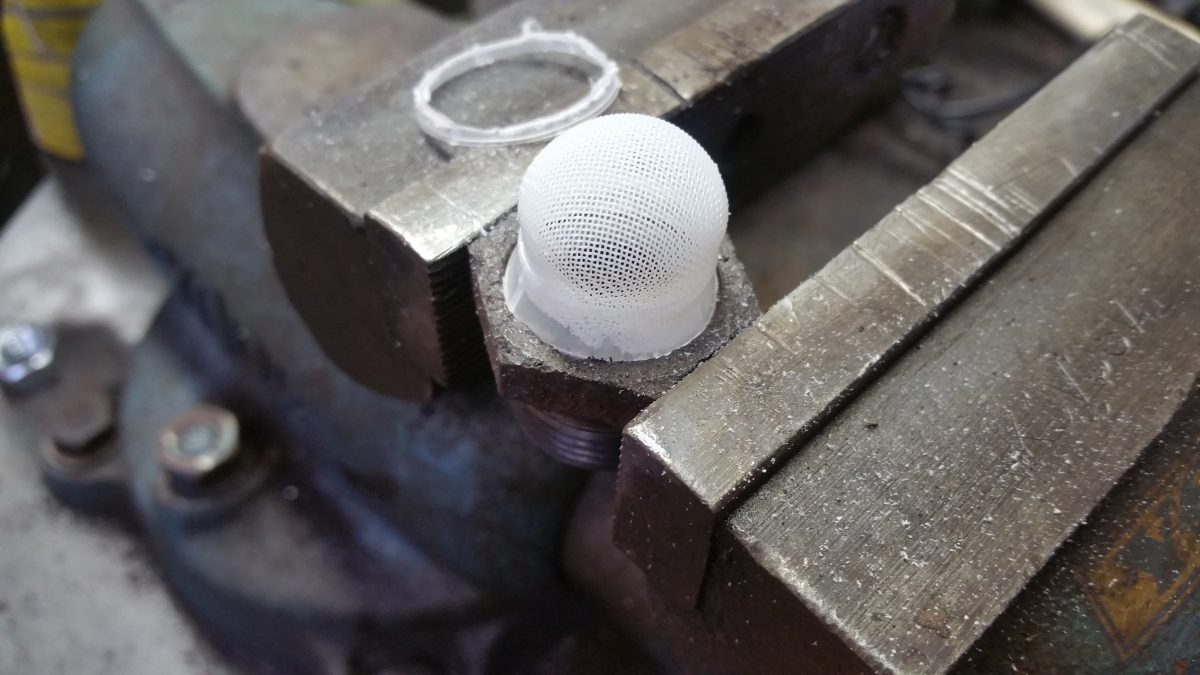 Next week we will have a look on the brake fluid container. Is there a possibility to save this beauty here? 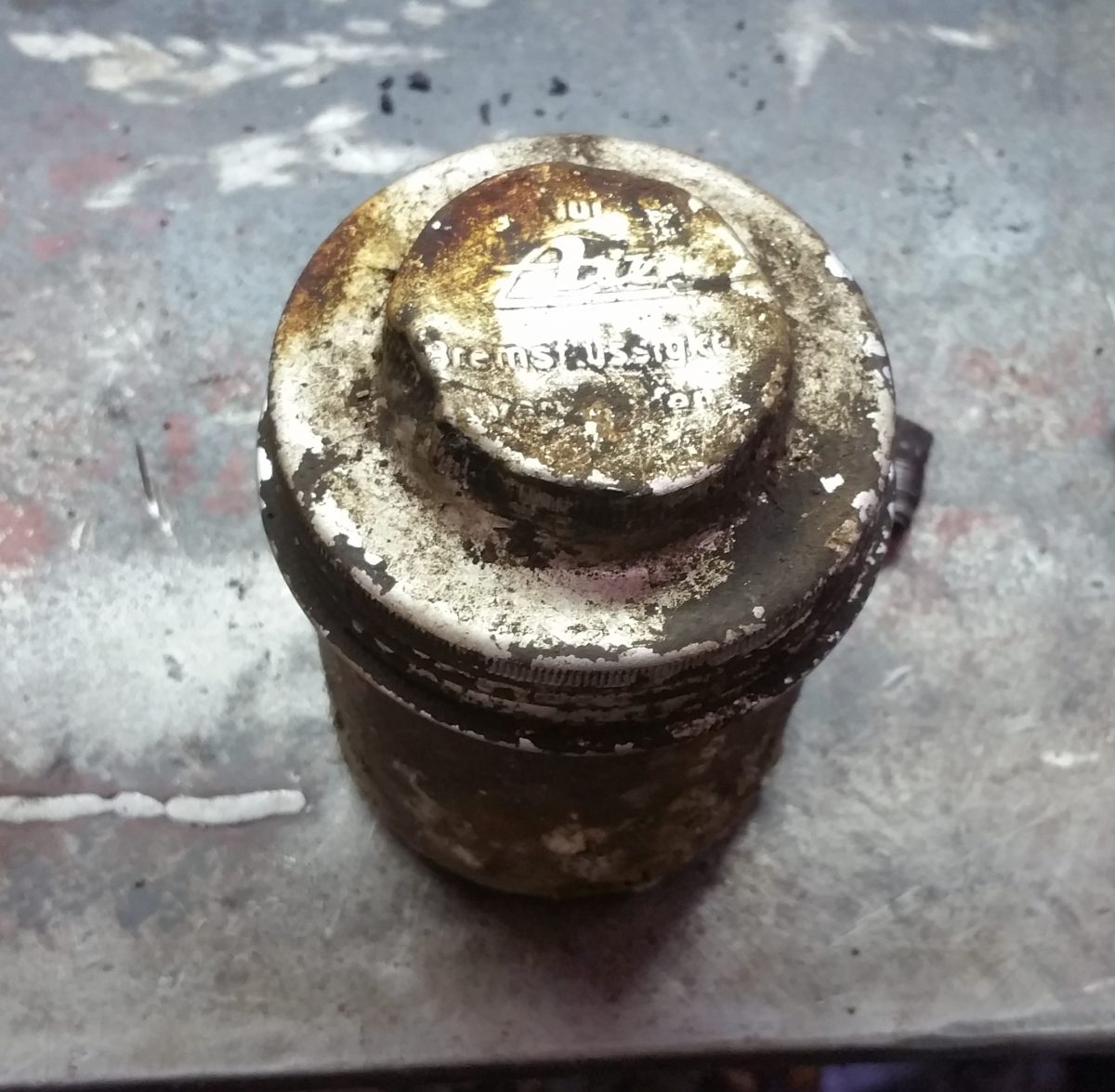 have a good start in the week!

One thought on “How far can patina go?”