our Samba was made in August 1951 and it is a real “born Samba”, so it was constructed as a Samba in the first place, not later converted from a stock bus into a Samba (the factory in Wolfsburg itself really did such conversions in the early days!). Björn Schewe and Eckberth von Witzleben checked the chassis number of our Samba in the Wolfsburg archives and they confirmed that this is “born Samba”.

Based on this fact I would like to clear an interesting little detail now. Not to many parts of our Samba survived, but all eight sky windows and one of the rear corner windows were still with the Samba when it was found. Sure all this windows are made of Plexiglas, but none of them has the typical “Plexiglas” script!

As we know this Samba is not a conversion and there are nine of the ten windows still with the car, we can exclude by 99% that this windows were exchanged later, because they were possibly broken. It would be very unlikely that nine of ten windows broke.

So could it be that the very first Sambas did not have the “Plexiglas”-script, because it came a little later than August 1951? What do the experts think? You are welcome to write me:  samba@vewib.de or come to the VEWIB-booth in Chimay this weekend.

See you at the EBI! 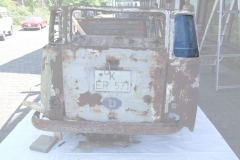 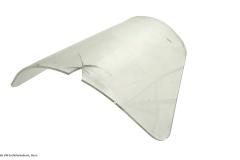